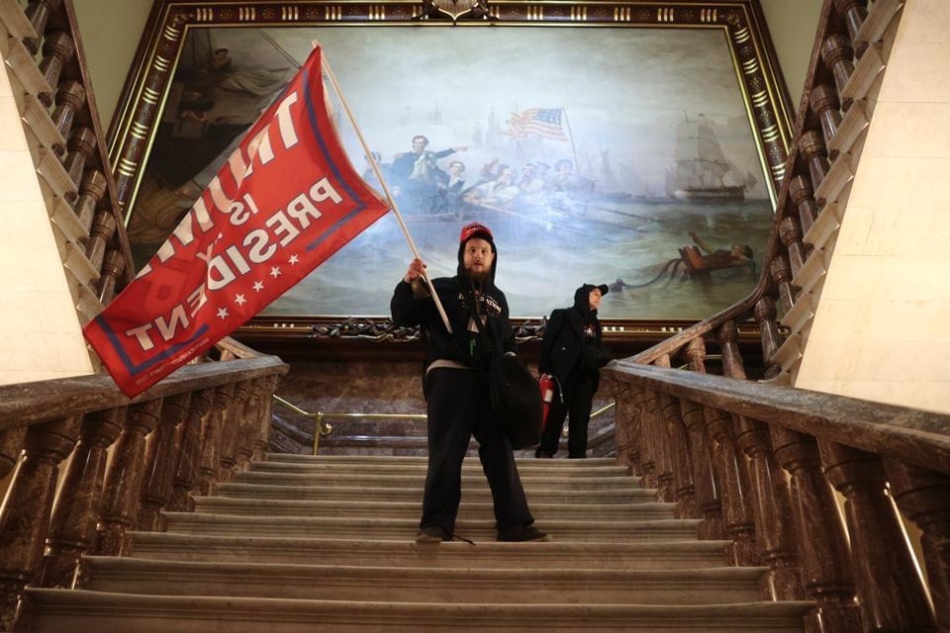 Shots have reportedly been fired and a woman has been left “critically” wounded after violent clashes broke out between Donald Trump supporters and police in Washington DC.

The US Capitol building was plunged into lockdown as crowds protesting Joe Biden’s victory in November’s presidential elections stormed through security barricades around the building where politicians had met to vote on the Democrat’s victory.

Protesters tore down metal barriers at the bottom of the Capitol’s steps and were met by officers in riot gear.

Some pushed past the officers who held shields and officers could be seen firing pepper spray into the crowd to keep them back, and a number shouted “traitors” as officers tried to block their path.

The skirmishes occurred outside in the very spot where President-elect Biden will be inaugurated in just two weeks.

The heated confrontations came just shortly after Mr Trump addressed thousands of his supporters, riling up the crowd with his baseless claims of election fraud at a rally near the White House on Wednesday ahead of Congress’ vote.

“We will not let them silence your voices,” the incumbent president told the protesters, who had lined up before sunrise to get a prime position to hear him speak. “We will never give up”.

But Mr Trump has vowed to “never concede” and earlier urged the massive crowd to march to the Capitol.

In response to the chaos later in the day, he tweeted: “Please support our Capitol Police and Law Enforcement. They are truly on the side of our Country. Stay peaceful!”

However, the situation swiftly became far from peaceful amid reports of an armed standoff at the entrance to the House chamber, with lawmakers stuck inside.

Members of Congress were instructed to put on gas masks after tear gas was dispersed in a bid to quell the clashes.

But after protesters stormed into the building, politicians, including Vice President Mike Pence and Speaker Nancy Pelosi, were evacuated.

One protester who managed to get into the Senate chamber got up onto the speaking platform and yelled: “Trump won that election.”

Several dozen were said to be roaming through the halls, yelling: “Where are they?”, while others were spotted in the visitors’ galleries.

Journalist Michael Del Moro, of MSNBC, tweeted a photo of a person apparently being carried out of the building by ambulance workers with “what appears to be a serious injury”.

CNN later reported that a woman had been left in a “critical condition” after being shot in the chest on the Capitol grounds.

Elijah Schaffer, a presenter on the right-wing Blaze TV channel, posted a picture which he claimed was taken inside the abandoned office of the House leader.

“BREAKING: I am inside Nancy Pelosi’s office with the thousands of revolutionaries who have stormed the building,” he wrote.

“To put into perspective how quickly staff evacuated, emails are still on the screen along side a federal alert warning members of the current revolution.”

In response to the mayhem, the region’s mayor Muriel Bowser ordered a citywide curfew from 6pm tonight until 6am tomorrow.

David Trone, a Democratic congressman from Maryland, said lawmakers “will not be stopped by this lawless intimidation”.

Tweeting a picture of himself in a gas mask, he wrote: “I am safe. We have been evacuated.

“Let me be clear: we will not be stopped by this lawless intimidation.”

Among those urging President Trump to act was his former communications director, Alyssa Farah, who wrote that he should “Condemn this now.”

She said: “You are the only one they will listen to. For our country!”

His former chief of staff Mick Mulvaney tweeted: “The President’s tweet is not enough. He can stop this now and needs to do exactly that. Tell these folks to go home.”

His lawyer, Rudy Giuliani, also addressed Trump supporters in a tweet, calling them the “patriots challenging the fraudulent election”.

CNN reported that Mr Trump was watching the carnage unfold on television from the West Wing.

“I am asking for everyone at the U.S. Capitol to remain peaceful,” he later tweeted.

“No violence! Remember, WE are the Party of Law & Order – respect the Law and our great men and women in Blue. Thank you!”

Vice-president Mike Pence tweeted: “Peaceful protest is the right of every American but this attack on our Capitol will not be tolerated and those involved will be prosecuted to the fullest extent of the law.”