The abrupt resignation of Lebanese PM Saad Hariri, who accused Iran and Hezbollah of a “desire to destroy the Arab world,” triggered a war of words in the region as countries blamed each other for his move amid fears of the destabilization of Lebanon.

Hariri announced his resignation on Saturday in a televised speech, citing fears for his life as the reason. Hariri, who holds dual Saudi-Lebanese citizenship, made his statement from an undisclosed location in Saudi Arabia.

Announcing his resignation, Hariri accused Iran and its Lebanese ally, the paramilitary organization and political party Hezbollah, of sowing strife in the Arab world. He warned Tehran that all the “evil” it allegedly “sends to the region” would eventually backfire and urged the Arab world to “cut off the hands that wickedly extend to it.”

“Iran has a strong desire to destroy the Arab world,” Hariri claimed. “In the past decades, Hezbollah was sadly able to create a de facto situation by the power of their weaponry which they claim is for resistance, but is being used against our Syrian and Yemeni brothers and even the Lebanese people.” It is unclear what “brothers” he was talking about, considering that Hezbollah participates in the Syrian conflict on the government’s side against Islamic State (IS, formerly ISIS/ISIL) and other terrorist groups.

“We are living in a climate similar to the atmosphere that prevailed before the assassination of martyr Rafik al-Hariri. I have sensed what is being plotted covertly to target my life,” Hariri stated, adding that he did not want to “let down” the Lebanese people by being killed.

Saad Hariri’s father, former Prime Minister Rafik Hariri, was killed in 2005 during a massive explosion in Beirut, which killed another 22 people. The assassination triggered the so-called “Cedar Revolution” in Lebanon, which led to the withdrawal of Syrian troops from the country after a 30-year presence, and sending it into years of political turmoil.

The UN-backed Special Tribunal for Lebanon issued arrest warrants for four Hezbollah members over suspicion of their involvement in Rafik Hariri’s death, while Hezbollah firmly rejected the accusations. In 2010, Hezbollah leader Hassan Nasrallah accused Israel of plotting to assassinate Hariri since at least 1993 as a way to create chaos in the country and force Syria to withdraw its troops.

The four Hezbollah operatives are currently being tried in absentia by the Tribunal. In 2014, the UN Independent Investigation Commission (IIC) also alleged that Syrian President Bashar Assad might be personally involved in the plot, but provided no solid proof to back it up.

War of words breaks out in the region

Tehran has firmly rejected Saad Hariri’s accusations, saying that Iran only seeks “peace and stability in regional states”and pointing out its “excellent” relationship with Beirut.  “The sudden resignation of Mr. Hariri and its announcement in another country are not only regrettable and astonishing, but also indicative of him playing in a court that the ill-wishers in the region have laid out,” Foreign Ministry Spokesman Bahram Qassemi said, as quoted by Press TV. 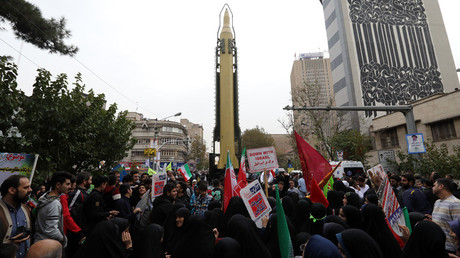 He also pointed a finger of blame at the US, saying instability in Lebanon could serve as a pretext for Washington and its allies to keep troops in the Middle East now that Islamic State (IS, formerly ISIS/ISIL) terrorists were on the verge of defeat.

An aide to Iran’s supreme leader Ayatollah Khameni, Hussein Sheikh al-Islam, was even more blunt and directly accused the US president of being an accomplice to the plot. “Hariri’s resignation was done with planning by Donald Trump, the president of America, and Mohammed bin Salman, the crown prince of Saudi Arabia,” said Sheikh al-Islam said, as quoted by Reuters.

Hariri’s movements before his surprise resignation might shed some light on the thinking behind it. Earlier this week, he met with top Saudi Arabia officials earlier this week, including the Saudi state minister for Gulf affairs Thamer al-Sabhan, who called for the “toppling” of Hezbollah and promised “astounding developments” in Lebanon after the meeting. Hariri abruptly returned to Saudi Arabia on Friday.
After Hariri announced his resignation, al-Sabhan claimed that Hariri’s security had “confirmed information” about the assassination plot against him, while the Lebanese internal security said it had no such information. The Saudi minister even used surprisingly similar wording to the Lebanese PM’s statement, saying that Iranian “hands of treachery and aggression must be cut off.”

Senior Israeli politicians also used Hariri’s resignation as a rallying cry against their arch-nemesis, Iran. “His words are a wake-up call to the international community to take action against Iranian aggression,” Prime Minister Benjamin Netanyahu said.