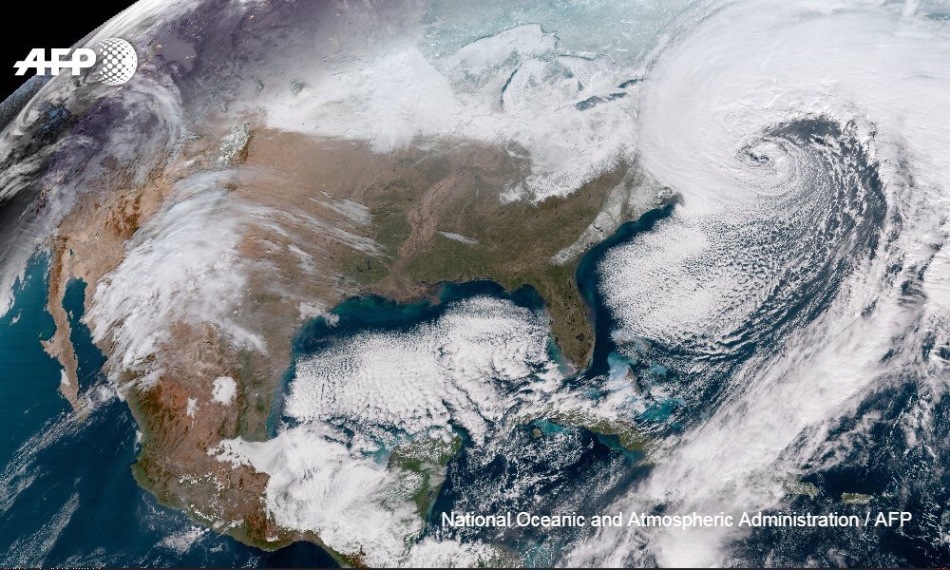 New York (AFP) – A giant winter “bomb cyclone” walloped the US East Coast on Thursday with heavy snow and freezing cold that made for treacherous travel conditions and bone-chilling misery.Four people were reported killed in the southeastern states of North and South Carolina, where icy roads sent vehicles skittering.

A cold wave gripping a large section of the United States had already been blamed for a dozen earlier deaths.

Thousands of flights were cancelled and schools closed in many localities as snow piled up and blizzard conditions began taking hold in the northeast.

Temperatures were so low in northern New York that Niagara Falls — the giant waterfalls straddling the US-Canadian border — froze.

Snowfall eased by nightfall but temperatures were set to plunge to 8 Fahrenheit (minus 13 Celsius) and remain sub-freezing all weekend.

Weather forecasters dubbed the event a “bomb cyclone,” their nickname for a phenomenon known as “bombogenesis,” in which a weather system experiences a sharp drop in atmospheric pressure and intensifies rapidly, unleashing hurricane-force winds.

Americans along the East Coast faced potential power outages in bitterly cold sub-freezing temperatures. About 30,000 customers in Virginia and North Carolina were deprived of electricity according to CNN.

Some 3,000 customers were hit in New York and about 10,000 in Boston, although service was partly restored at the end of the day.

In coastal Boston, the storm was accompanied by giant waves that led to what Massachusetts Governor Charlie Baker described as “historic flooding” that inundated the city’s eastern streets as well as coastal areas of the state.

New York mobilized additional resources by declaring a state of emergency, while a Singapore Airlines A380 was forced to land at the Stewart Airport upstate after being diverted from the city’s main JFK International.

The National Guard deployed about 500 personnel along the coast, according to a statement.

“Currently, the main focus is assisting with transportation support and vehicles,” the statement said.

The southeast was the first to feel the storm’s icy lash, when Florida on Wednesday saw its first snow in nearly three decades.

North Carolina Governor Roy Cooper lamented the deaths of three people in his state, including two killed when their pickup truck slid off a bridge and landed on its roof in a creek bed.

Roads were closed in northern Florida and southeastern Georgia, where Governor Nathan Deal declared a state of emergency in coastal areas.

With up to a foot (30.5 centimeters) of snow expected in parts of New York, accompanied by powerful wind gusts, schools were closed. More than a foot of the white stuff was expected in Boston.

Governor Andrew Cuomo warned: “Frigid temperatures are expected overnight, which should further complicate the situation” adding there had been a number of serious accidents.

Wind gusts of up to 55 miles (88.5 kilometers) per hour were expected through Friday on Long Island and southeastern Connecticut, with wind chills as low as – 20 F (- 29 C), increasing the risk of frostbite and hypothermia from prolonged exposure.

Airlines have scrapped more than 4,200 flights into and out of the United States so far due to the storm, and delayed 2,200 others, according to flight tracker FlightAware.

Nearly 75 percent of flights departing Boston and New Jersey’s Newark airports were cancelled, though only about a quarter of flights to and from New York’s main airport were scrapped.

Air France cancelled all flights Thursday and Friday from Paris to New York and Boston.

“Virginians living in the impacted areas should stay off the roadways to allow local and state road crews and first responders to do their jobs safely and efficiently,” he said.

“With continued frigid temperatures expected to last for several more days, road conditions will remain treacherous beyond the expected end of the snowfall today,” he added.

In Washington, despite only a dusting of snow, federal agencies opened two hours late, many schools were closed and Senate Majority Leader Mitch McConnell announced the chamber would hold no further votes this week, curtailing what was already a short work week due to the New Year’s holiday.

Senators had only returned to the upper chamber Wednesday, facing a series of critical votes in the coming weeks, including on funding to prevent a government shutdown and spending cuts.