Gulf states are studying plans to break the deadlock over the Saudi-led boycott of Qatar by persuading the two sides to agree to relax restrictions on civilian movements as the first step to a wider deal.

The dispute with Qatar is likely to be one of the major topics for discussion between the Saudi crown prince, Mohammed bin Salman, and the UK prime minister, Theresa May, when the two leaders meet in London on Wednesday.

Britain has urged Saudi Arabia to lift the blockade, which has damaged economies across the Gulf but has not brought Qatar to its knees nor led to a change in regime.

In what would be seen as a mutual goodwill gesture designed to lead to the end of the nine-month boycott of the country by Saudi Arabia, Bahrain, Egypt and the United Arab Emirates, the two sides would allow citizens of each others’ countries to travel freely. 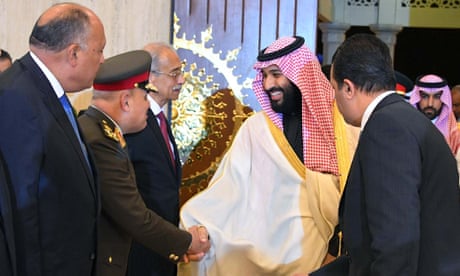 Such a move would require Qatar’s neighbours to end the air blockade that has prevented Qatari flights from landing in their territory and from using their airspace. As many as 10,000 Gulf citizens, most with relations in neighbouring states, have been affected by the land, sea and air restrictions.

Saudi and UAE leaders have urged the west not to regard the boycott as a family feud between Gulf states but as a serious move against Qatar’s alleged championing of extremist political movements in the Middle East, including Hezbollah, the Muslim Brotherhood and Hamas.

The Saudi foreign minister, Adel al-Jubeir, said it did not want the dispute settled by anyone but the Gulf states, and that the pressure of the boycott was forcing Qatar to change its approach to funding terrorism.

Qatar has categorically denied the charges and accused the Saudi-led alliance of attempting to curtail its sovereignty.

Qatar and the boycotting states have been locked in an expensive competition for influence in the west, spending billions on arms purchases, PR and state visits in an effort to win favour. Qatar insists that by reacting to the boycott in a measured way, it has shown it can be a reliable diplomatic and military partner for the west.

The US wants the dispute ended partly because it fears it could drive the extraordinarily wealthy Qatar closer to Iran. The US would prefer a united Gulf willing to challenge Iran over its nuclear ambitions and foreign policy. It has its largest regional military base in Qatar and the US secretary of state, Rex Tillerson, has steered the administration away from its initial stance supporting the Saudi boycott.

Donald Trump will have a chance to test Saudi flexibility when the crown prince meets the US president in Washington after his UK visit on Wednesday and Thursday this week.

In an attempt to convince the west that Qatar has a coherent alternative vision for a cooperative and stable Middle East that rivals the adventurism of the crown prince, the emir of Qatar, Tamim bin Hamad al-Thani, has set out plans for a Middle East security pact incorporating not just Gulf states, but also other states in the region. The plan is intended to counter what Qatar describes as the unilateral adventurist foreign policy of Saudi Arabia.

The emir’s’s communications chief Sheikh Saif bin Ahmed al-Thani told the Guardian that the pact “would be a way of ensuring that what happened to Qatar does not happen anywhere else”; it would represent”a baseline of co-existence, backed by binding arbitration mechanisms, and enforced by the collective body of the region”.