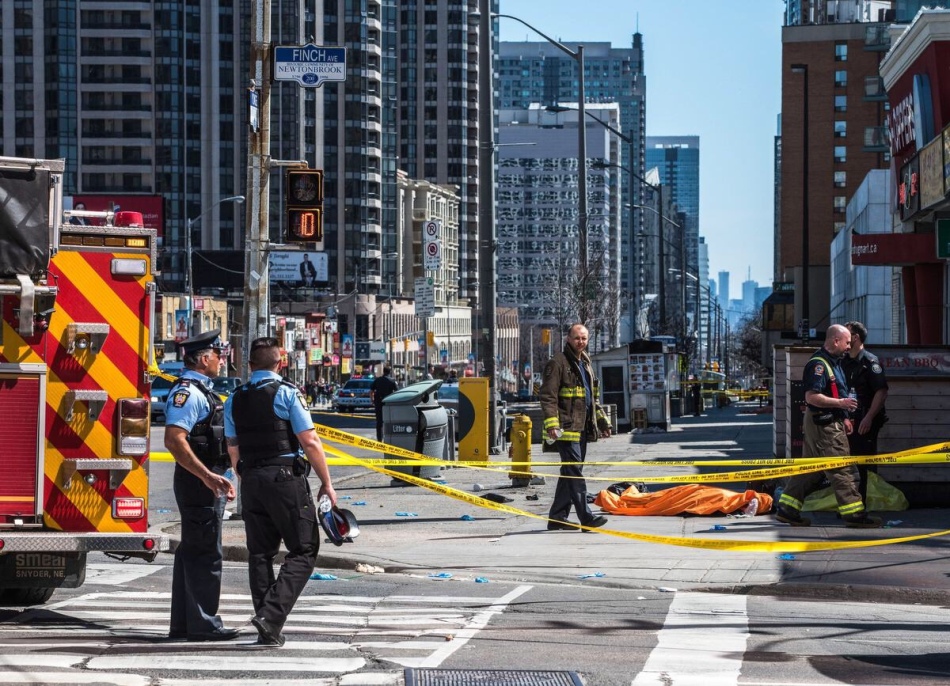 A van plowed into pedestrians on a sidewalk at a busy intersection in Toronto on Monday afternoon, killing 10 people and injuring 15 others, police said. Authorities said terrorism wasn’t suspected.

Many media units quoted officials saying it was ‘mental illness of the suspect’ to blame, ironically within hours of the attack, rather than terrorism, in its usual trait of dismissing incidents which doesn’t not involve Muslims. This after some journalists tweeted that the suspect looked ‘Middle eastern’.

“He’s just hitting people one by one, going down,” Shaker said. “It was a nightmare.”

Visibly frightened by what he saw, Shaker could barely recount the horror he witnessed. He said he was driving when the incident occurred.

“I’m so shaky — I can’t believe this is happening,” he said. “This is so unbelievable.”

Shaker said that he assumed at first that the driver was experiencing some kind of medical emergency and even attempted to try to stop the driver from causing more carnage.

“I thought he had a heart attack or something so I was trying to chase him on the way, almost trying to catch up,” he told CTV News, adding that the driver was moving fast.

“He hit every everybody on the sidewalk; anybody in his way he would hit,” Shaker added. “The bus stop — all shattered. There was a lady in there I saw and I stopped and I looked and I went after and all I see is just crumbling one by one.” 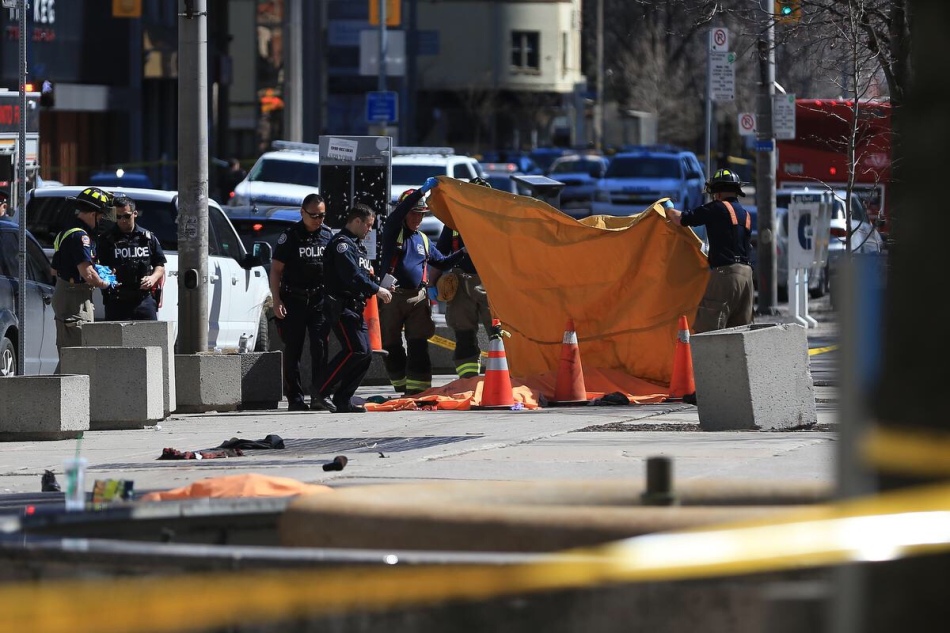 Another witness said he stopped outside of a building for a smoke break and saw a middle-aged man get struck as he was crossing the street.

“As I lit up my cigarette I saw a man walking in the middle of the intersection and a van plowed right into him,” the witness, who went by Steve, told CTV News. “I saw the guy go flying… It was just clear as day, just saw the guy get hit by the van and pieces of the van fell off.”

Afterward, Steve said he rushed into the middle of the street to tend to the injured man “to make sure no other cars struck him.”

The victim, he said, was around 50, was unconscious “and could barely move.”

Steve added that the van kept driving and hit others, leaving behind pools of blood.

“I saw three or four [people] on the ground around me,” he said. “Other people were getting CPR.”

He’s convinced that stopping for the cigarette break saved him, Steve said.

Sunnybrook Health Sciences Centre said it had received seven patients from the scene.

Police arrive on the scene where a white van struck pedestrians, April 23, 2018, in Toronto, Canada.

Images from the scene show multiple people on the ground.

Video showed the moment police confronted the suspect. In the video, a police officer draws his firearm and faces off against the suspect, who appears to be pointing an object.

Canadian Prime Minister Justin Trudeau said that while he’s “just learning about the situation in Toronto, our hearts go out to any affected. We’re going to obviously have more to learn and more to say in the coming hours.”

Toronto’s Mayor John Tory his “thoughts are with those affected by this incident.”

He appeared before reporters this afternoon to announce the death toll and said the beautiful weather meant multiple people were out on the street.

“There were a lot of pedestrians out … enjoying the sunny afternoon,” the mayor said.

Ralph Goodale, the country’s minister of public safety and emergency preparedness, called the incident an attack but said he didn’t want to speculate when asked if the terrorism was to blame.

“We cannot come to any firm conclusions at this stage,” he said.

Secretary of Homeland Security Kirstjen Nielsen is in Toronto as part of the G-7 Security Ministerial, which is set to conclude on Tuesday. A senior State Department official told ABC News that the U.S. delegation is safe.

Ryder, the brand of rental truck involved in the incident, said in a statement it was saddened by “this tragic event” and extended its “deepest sympathies” to those impacted.

The company also stated that it is “cooperating fully with authorities.”