Amman (AFP) – Jordanian Prime Minister Hani Mulki resigned on Monday after he was summoned by King Abdullah II over growing protests against his government’s austerity measures, a government source said. 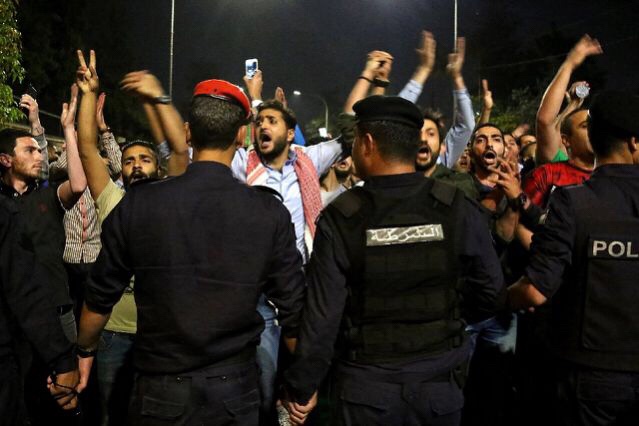 “Prime Minister Hani Mulki submitted his resignation to the king this afternoon during a meeting at the Husseiniyeh Palace and the king accepted the resignation,” the source told AFP.

Demonstrations have rocked the capital Amman and several other cities since Wednesday after the government adopted a draft income tax law and announced new price hikes based on recommendations by the International Monetary Fund.

Protesters had called on Mulki to step down, vowing not to “kneel” and earning support from trade unions as well as a majority of MPs opposed to the new taxation.

The premier’s meeting with the king came hours after around 5,000 people rallied outside Mulki’s office in Amman, on the fifth consecutive day of protests in Amman and other cities.

Jordan, a mostly desert kingdom with few resources, has seen prices of several basic goods and services like bread, fuel and electricity steadily rise over the past year.

Last month the government adopted a draft income tax law, yet to be approved by parliament, aimed at increasing taxes on employees by at least five percent and on companies by between 20 and 40 percent.

And last week it announced a new price hike for electricity and fuel, before revoking it under orders from the king following protests.

They were the latest measures in a series of economic reforms since Amman secured a $723-million three-year credit line from the IMF in 2016.

The loan, intended to support economic and financial reforms, has the long-term objective of reducing Jordan’s public debt from about 94 percent of GDP to 77 percent by 2021.

Mulki had formed his government just over two years ago in May 2016.