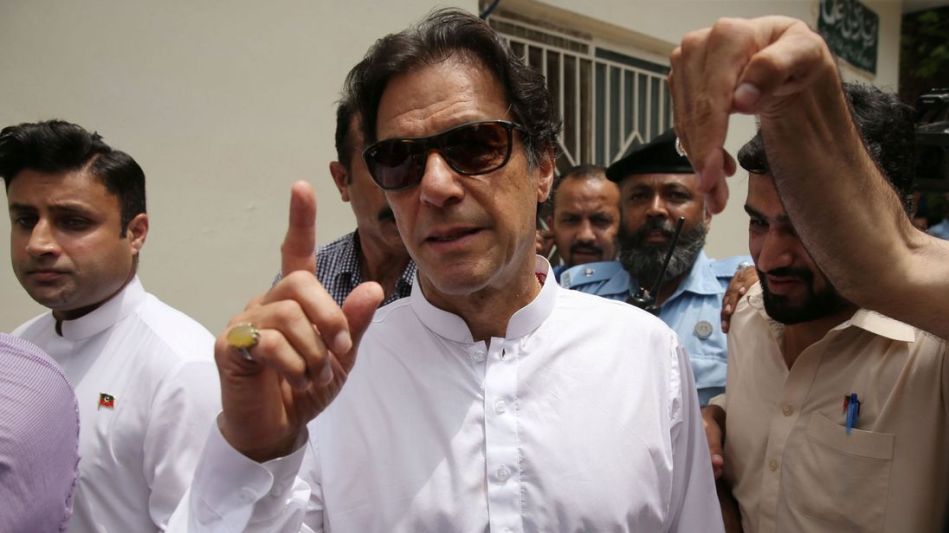 Islamabad, Pakistan – A bomb attack has left at least 31 people dead and more than 30 injured as Pakistanis vote Wednesday amid heavy security in a fiercely contested general election.

The explosion took place on the outskirts of Quetta, Balochistan province’s capital. The cause of the blast was unknown, said the city’s superintendent of police Quetta, Naseeb Ullah.

Shopkeeper Akber Khan, who witnessed the attack, said he had already cast his vote at a nearby polling station and returned to his shop. Stepping outside again, he’d “hardly walked a step or two” when the blast occurred.

“We got down on the ground. Most people started running. After 10 minutes, when the chaos was over, we started picking up the injured. We carried them into private vehicles as ambulances had not arrived yet.”

ISIS has claimed responsibility for the attack although it was not independently verifed.

Meantime in Khyber Pakhtunkhwa, one person was killed and three injured in a skirmish outside a polling station between supporters of Imran Khan’s Pakistan Tehreek-e-Insaf (PTI) and the province’s Awami National Party.

Khan condemned the Quetta blast, saying in a tweet he was “saddened by the loss of innocent lives,” adding that “enemies of (Pakistan are) seeking to disrupt our democratic process … Pakistanis must defeat the terrorists’ design by coming out in strength to cast their vote.”

Shahbaz Sharif, who replaced his brother as their party’s candidate, said in tweet: “Heart broken to learn of martyrdom of innocent people including police officials … My profound condolences to the bereaved families.”

A huge security operation was launched after several attacks in the lead-up to the election. On July 16, 150 people were killed by a suicide bombing in Balochistan that targeted a political candidate and led to suggestions the vote could be delayed in order to get the situation under control.

Police and military personnel were out in force at polling stations across the country, with security officials flying surveillance drones in the troubled northwest city of Peshawar. Long lines of voters queued in the major cities of Karachi, Quetta and Peshawar.

Army officials said more than 370,000 troops had been deployed to ensure a “fair and free” election, with police estimating the total security force at 800,000 personnel.

Newspaper headlines Wednesday were dominated by the pivotal election, with one describing it as on a “knife-edge.” Many also noted the heavy security presence as voters went to the polls.

Nearly 106 million people are registered to vote for members of the lower house of parliament and four provincial assemblies.

This week’s election is only the second time in Pakistan’s 71-year history that the country has seen a democratic transition of power.

The run-up to the vote has been dogged by increasing tensions over allegations that the country’s powerful military has secretly backed Khan, a massive crackdown on the media and the electoral participation of militant groups.

The Human Rights Commission of Pakistan (HRCP) has expressed “serious reservations about the extraordinary powers accorded to security forces” and called the election “the dirtiest” in the country’s history.

Khan has repeatedly denied claims he is supported by the military and condemned the harassment of election candidates.

The former Pakistan cricket captain said he had voted, telling reporters: “I am a sportsman, I’m not going to declare victory until the last bowl has been bowled.”

Pakistan election: Who is likely to be the country’s next leader?

With Sharif’s incumbent Pakistan Muslim League-Nawaz (PML-N) still on the back foot after his imprisonment, the election represents a real chance for Khan’s center-right PTI to break into the two-party system that has traditionally dominated national politics.The final result may go down to the wire, however, leaving candidates in coalition negotiations, either with the once-dominant Pakistan People’s Party (PPP) — led by the 29-year-old Bilawal Bhutto Zardari, son of former President Asif Ali Zardari and Prime Minister Benazir Bhutto — or with some of the wide array of smaller parties.

If successful, the elections will mark only the second time a civilian government has handed power to another since the country’s independence in 1947.

The race to be the country’s next prime minister is tight, but most polls are predicting a narrow victory for the former Pakistan cricket captain Imran Khan.

The head of the centre-right Pakistan Tehreek-e-Insaf party is likely to have to form a coalition if he wants to govern though.

Khan has built on his sporting celebrity and the PTI’s success as a regional party to emerge as a change candidate, attracting religious conservatives and drilling down on Pakistan’s endemic corruption — a task made easier by Sharif’s conviction.

Some analysts, however, say that he lacks the national-level political experience to enact any meaningful reform, and will be hampered by less-than-loyal allies in his party and the influence of the military.

Khan’s supporters remained optimistic that if elected, his slogan of building a “New Pakistan” would bear fruit.

“I have just voted for PTI,” said Amna Gardar in Lahore, the capital of Punjab province. “If you want to be part of that change, please come out, please vote.”

All eyes will be on whether Shahbaz Sharif can maintain the PML-N’s grip on its stronghold in Punjab, Pakistan’s most populous and richest province. It will be exceedingly difficult for Khan to take power without winning Punjab. Analysts were divided over whether Sharif’s jailing would generate a sympathy vote.

The incumbent party on Wednesday formally requested voting hours be extended by an hour due to slow-moving lines and the “tedious, slow, cumbersome voting procedure.” The request, made to the Election Commission of Pakistan, was rejected.

As early voters streamed to polling stations, Shahbaz tweeted that he had cast his vote, urging his fellow countrymen to participate in the election. 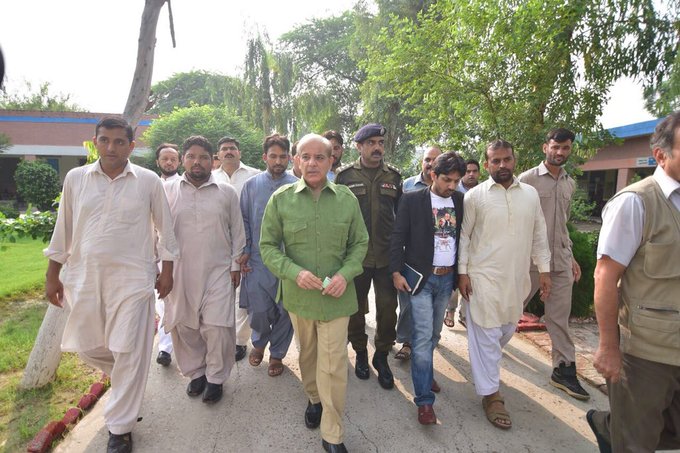 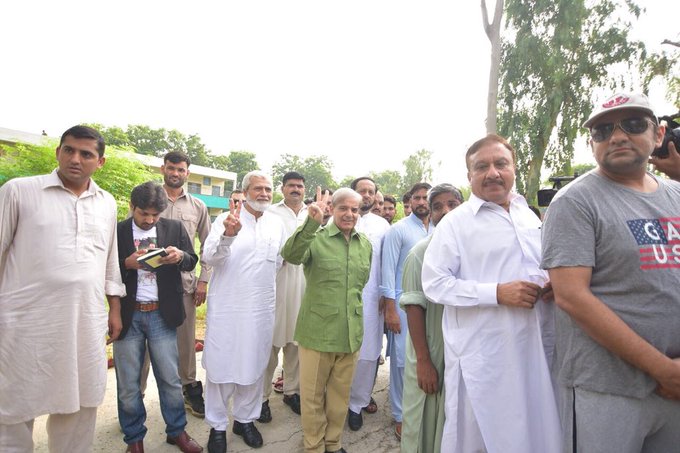 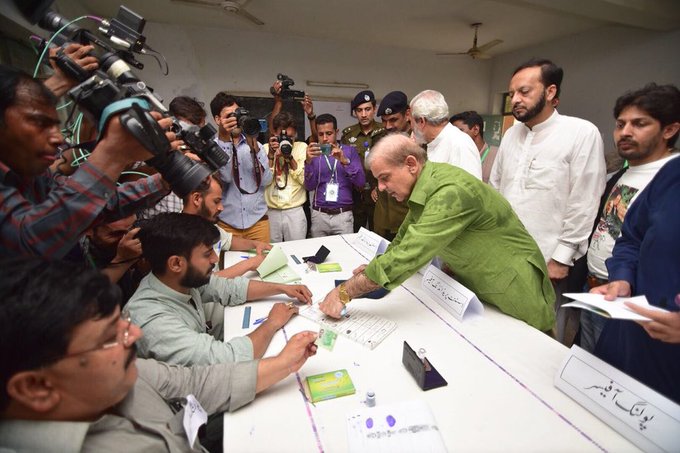 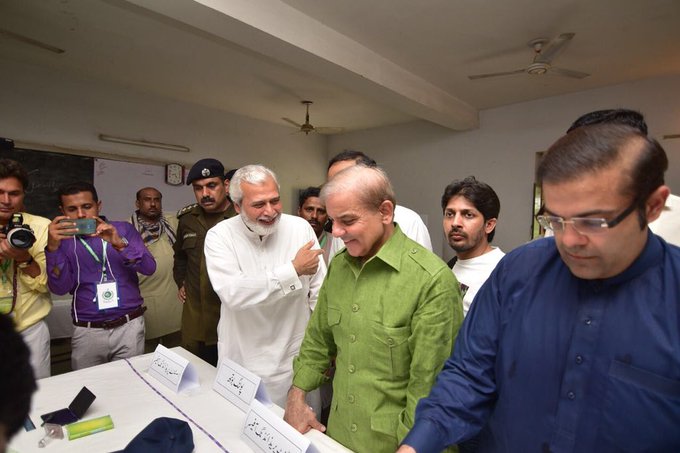 “High time that all of you came out to vote for Pakistan’s progress and prosperity,” he said. “May this election be a source of peace and stability for the nation!”

Whoever forms the next government of Pakistan, an Islamic republic of 207 million people, will have to deal with a massive debt crisis. The nuclear-armed state also faces uncertainty over its relationships with the United States, which has cut military aid due to Islamabad’s alleged support for the Taliban in neighboring Afghanistan, and China, which has financed multi-billion-dollar infrastructure projects in the South Asian country.

0 comments on “Pakistan Election: 31 dead in bomb attack as voting continues to chose the next Pakistan leader”