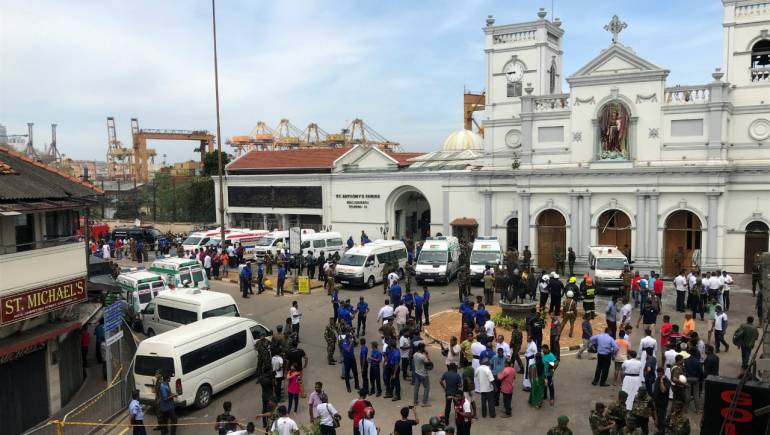 Sri Lanka declared a nationwide curfew after a string of eight explosions, mostly in Colombo, left at least 185 people dead and over 400 injured on Easter Sunday, authorities said.

Xinhua news agency reported that the death toll in the multiple blasts had risen to 185 even as two fresh explosions occurred in two Colombo neighbourhoods in the afternoon.

There were six initial blasts, at three hotels and three churches, before two more explosions some time later, at a guest house and housing scheme, with two people reported to have been killed at the former. Harsha de Silva, a government minister, said the last two blasts appeared to have been carried out by the culprits as they fled from police.

One of the explosions was at St Anthony’s Church in Kochcikade, Colombo.

St. Sebastian’s church posted pictures of destruction inside the church on its Facebook page, showing blood on pews and the floor, and requested help from the public.

St. Anthony’s Shrine, a Catholic church in Colombo, and Zion Church, in Batticaloa, were also attacked. Colombo, the country’s capital is located on the western side of the island nation, while Batticaloa is on the eastern shore. 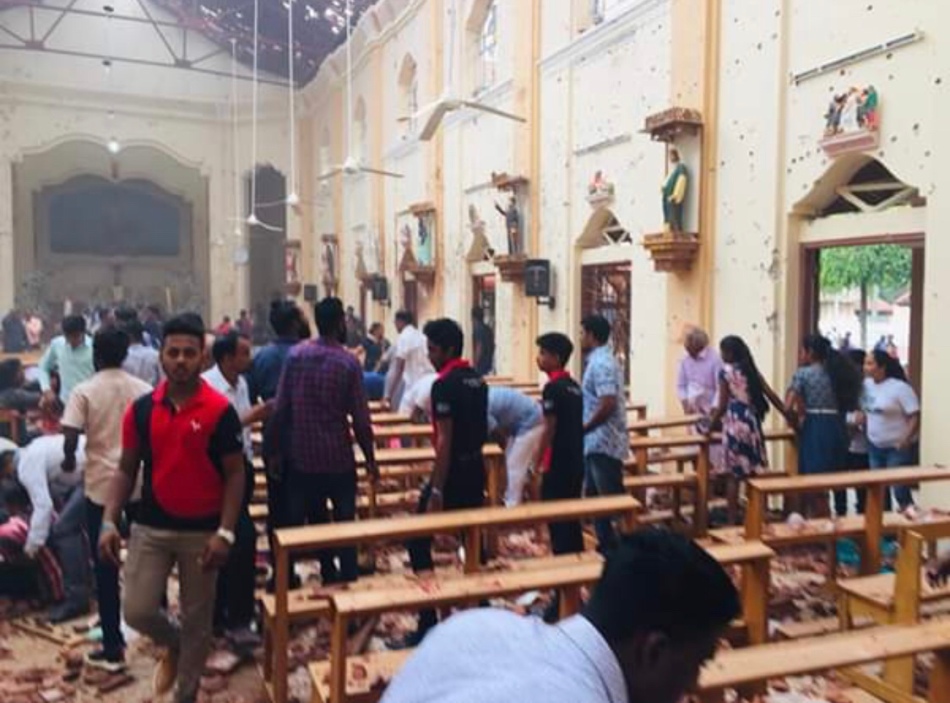 The three hotels hit were the Shangri-La Colombo, Kingsbury Hotel and Cinnamon Grand Colombo. It was unclear whether there were any casualties in the hotels.

35 foreigners were among the dead, the officials said.

A hospital source said Americans, British and Dutch citizens were among those killed in the six blasts, which also injured hundreds of people.

“A curfew will be imposed until things settle down,” he told reporters in Colombo.

Government officials also said major social media networks and messaging apps, including Facebook and WhatsApp, have been blocked inside the cuntry to prevent misinformation and rumors.

A new blast hit the Sri Lankan capital of Colombo on Sunday, police said, the eighth explosion in the country in a single day.

Police said the blast hit the suburb of Orugodawatta in the north of the capital, but there were no further details on what was targeted.

Sri Lanka’s Prime Minister Ranil Wickremesinghe condemned a string of blasts that killed at least 156 people on Sunday as “cowardly” and said the government was working to “contain the situation.”

“I strongly condemn the cowardly attacks on our people today,” he said in a tweet from his verified account.

“I call upon all Sri Lankans during this tragic time to remain united and strong… The government is taking immediate steps to contain this situation.”

Russian President Vladimir Putin has denounced a series of attacks on churches and hotels in Sri Lanka as “cruel and cynical.”

In a telegram of condolences sent to his Sri Lankan counterpart, the Russian leader said Moscow remains a “reliable partner of Sri Lanka in the fight against international terrorism.”

He added that the Russians “share the grief of the relatives of those killed and wish a quick recovery to all those who were wounded” after the Easter Sunday blasts that killed at least 138 people.

Putin voiced confidence that “the perpetrators and the masterminds of such a cruel and cynical crime committed amid the Easter festivities will take the punishment they deserve.”

Turkish President Recep Tayyip Erdogan has condemned the Easter Sunday attacks in Sri Lanka, calling them “an assault on all of humanity.”

In comments posted on Twitter, Erdogan offered his condolences to families of the victims and to the people of Sri Lanka.