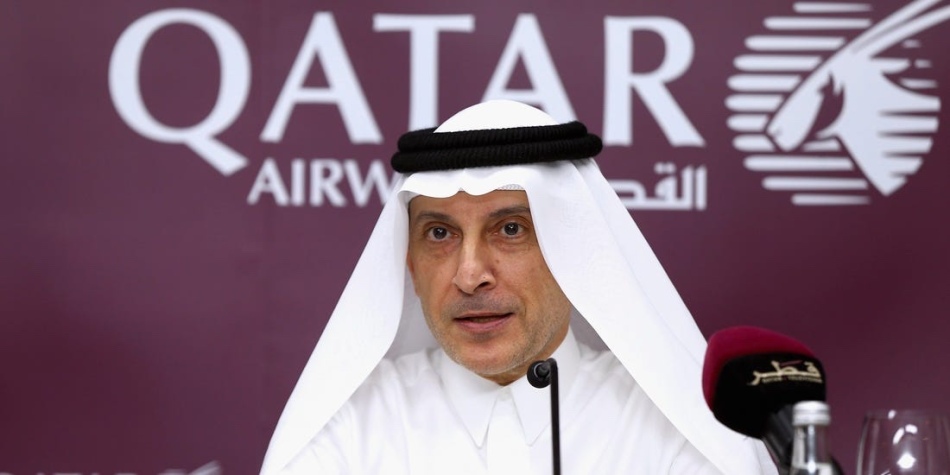 As the global aviation industry grapples with the impact of the COVID-19 pandemic Akbar Al Baker, chief executive of Qatar Airways, has condemned demands to introduce social distancing on aircraft because of the outbreak – warning it would push up the price of air travel.

He told Sky News: “Social distancing is really not necessary in an aeroplane.

“If that is implemented, the prices for air travel go will go up extremely, because you’ll be carrying a 30-40% load factor on an aeroplane.

“[You will still] have the possibility to infect somebody else, by touch, or by rubbing into each other when you’re going back to your seats.

“So I think that social distancing really should not be implemented in an aeroplane as long as you’re going to take all the precautions you need – masks, gloves – and in Qatar Airways we are also supplying face shields and fully clad PPE for cabin crew.

“We are taking all the mitigating factors to make sure that the air is still the safest way to travel.”

Mr Al Baker had particularly strong words for how Prime Minister Boris Johnson has imposed a 14-day quarantine period for people arriving in the UK.

“Your prime minister’s encouraging people to travel,” he said.

“So I think it was a bit unwise for him to introduce quarantine when he actually requires people to come and start visiting the UK and fuelling the economic and business resurgence in the United Kingdom.

“I don’t think that it was a really good idea to introduce quarantine at the tail end of the pandemic.

“In my opinion, they should have been introduced in the beginning, and not at the end.”

He said he was optimistic that, when the policy was reviewed at the end of June, the UK government might have a change of heart.

His comments carry huge weight because, during the last three months, Qatar Airways has become the world’s largest international carrier.

When lockdowns were introduced around the world, its aircraft flew more than 50 million kilometres during March, April and May to repatriate more than 1.8 million passengers on more than 15,000 flights.

According to data from the International Air Transport Association (IATA), the carrier lifted its share of the global passenger airline market to 17.8% in April, more than three times that of its nearest competitor and more than the next four airlines combined.

It is currently operating 35% of its pre-crisis schedule, but Mr Al Baker said he hoped that – as airports open around the world – this would increase to 75% during the next four to eight weeks.

He said some flights were as busy as 90-92% full but that, overall, load factors were lower.

Qatar Airways has tried to compensate for fewer passengers by carrying more freight.

Asked when Qatar Airways might return to passenger levels seen before the crisis, Mr Al Baker replied: “I wish I had a crystal ball.

“I don’t think it will be anywhere close in the next 24 months.”

As well as having strong words for the UK government, Mr Al Baker also had a stern warning for others in the industry, most notably the aircraft manufacturers Airbus and Boeing.

Going into the pandemic, Qatar Airways had orders with both for more than 200 aircraft, including 50 A321 neos from Airbus and 60 777Xs from Boeing.

The airline is now seeking to defer delivery of a number of aircraft it has on order.

Mr Al Baker said: “Quite a lot of them will be deferred.

“We have already notified both Boeing and Airbus that we will not be taking any aeroplanes this year or next year.

“And all the other aircraft that we have on order, that were supposed to be delivered to us within the next two or three years, will now be pushed back to as long as nearly eight to 10 years.”

He said that, if traffic increased as business ramped up, Qatar Airways could look at bringing forward those delayed aircraft deliveries.

But he warned: “[Boeing and Airbus] should know, both of them, that if they don’t oblige to our requirements, then we will have to review our long term business relationships with both of them.”

He said that Qatar had cancelled orders from Boeing for 30 of the 737 MAX jets grounded last year, following two fatal crashes in Indonesia and Ethiopia, because they were no longer required.

Mr Al Baker also dismissed a suggestion that the company’s decision to raise its stake in International Airlines Group – the owner of British Airways, Iberia and Aer Lingus – to 25.1% in February, at a cost of $601m, had been poorly timed.

He said: “[It] doesn’t matter. We are there and for the long run.

“It is a strategic investment and we will continue to be an investor in IAG.

“It’s similar to what we have done to both LATAM and Cathay Pacific [the Chile and Hong Kong-based carriers, both of which have Qatar as a 10% shareholder].

“We have stood by them when they require our support.”

He said that support would, if necessary, include injecting more capital into IAG: “If is necessary, yes, we will inject equity into IAG because it is a long term investment from Qatar Airways.”

Qatar Airways, like almost every carrier around the world, has responded to the crisis by cutting jobs and deferring the salaries of higher paid employees.

But Mr Al Baker, who in March said he would forego his salary until the airline returned to full operations, insisted the actions needed to be put in context.

He added: “We are going to lay off as [few] staff as possible.

“We are going to give salary cuts but it is not going to be permanent.

“As soon as the services start ramping up, as soon as we go back to the pre-2019 traffic figures, we will eventually ramp up everybody’s salary cuts that we have implemented.

“The salary cuts that we are implementing are not very extreme.

“And it is important for me to state that, as soon as the traffic starts ramping up and we start flying, we will give priority to the people that we laid off to come back and again serve Qatar Airways.”

The mantra for business people down the ages is never to let a good crisis go to waste.