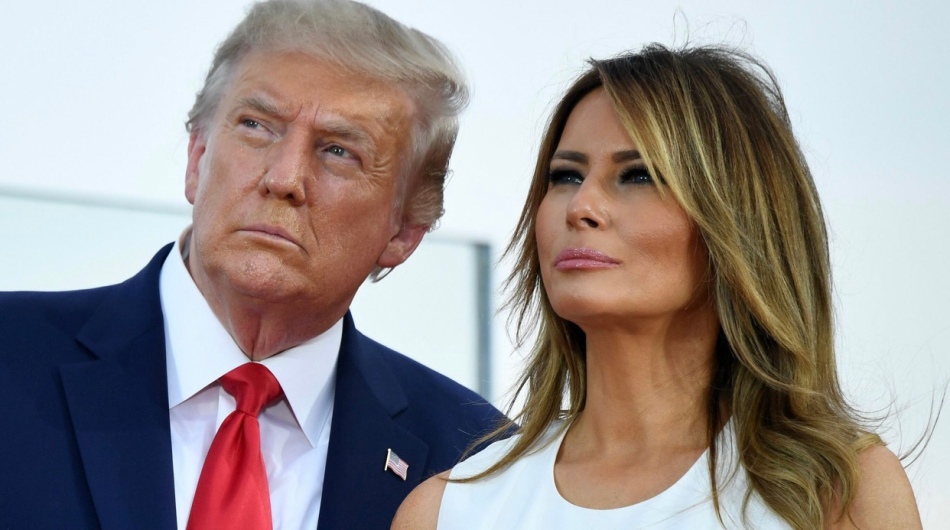 US President Donald Trump has said he and First Lady Melania Trump have tested positive for coronavirus and are now in quarantine.

The president, aged 74 and therefore in a high-risk group, announced the news in a tweet. “We will get through this together,” he wrote.

It comes after one of his closest aides tested positive for coronavirus.

Hope Hicks, the 31-year-old adviser to the president, was the closest aide to Mr Trump to test positive so far.

She travelled with him on Air Force One to the first presidential TV debate with Democratic rival Joe Biden in Ohio on Tuesday. Some of Mr Trump’s family members who attended the debate were seen not wearing masks.

Mr Trump has mostly spurned mask-wearing and has often been pictured not socially distanced with aides or others during official engagements.

Mr Trump’s physician Sean Conley released a statement, saying the president and the first lady “are both well at this time, and they plan to remain at home within the White House during their convalescence”.

“Rest assured I expect the president to continue carrying out his duties without disruption while recovering, and I will keep you updated on any future developments,” the statement said.

Earlier on Thursday, Mr Trump said he and his wife, who is 50, were going into quarantine after Ms Hicks’s positive test.

He tweeted: “Hope Hicks, who has been working so hard without even taking a small break, has just tested positive for Covid 19. Terrible!

“The First Lady and I are waiting for our test results. In the meantime, we will begin our quarantine process!”

It is not clear how Mr Trump’s positive test will affect arrangements for the second presidential debate, which is scheduled for 15 October in Miami, Florida.

A week after Donald Trump told Americans not to worry about Covid-19 because “it affects virtually nobody” except the elderly and those with heart conditions, the president himself has tested positive for the virus.

It is difficult to overstate exactly how earth-shaking a development this is, just 32 days before the US elections.

The president will have to quarantine for treatment. Campaign rallies are off. The next presidential debate, in two weeks, is in question.

The recurring message from the president, that the nation is “rounding the turn” in its handling of the virus, has been undermined by his own illness.

Just two days ago, during the first debate, Trump belittled Democratic opponent Joe Biden for frequently wearing masks and not having campaign rallies that matched his own in size.

During times of national turmoil, the American public tends to rally in support of the president. It may not be enough to insulate him from the questions that follow, however.

A letter from Sean Conley, physician to Mr Trump, confirmed the positive test on Thursday and said the president and first lady would remain at the White House during their isolation.null

It added: “The White House medical team and I will maintain a vigilant watch, and I appreciate the support provided by some of our country’s greatest medical professionals and institutions.

“Rest assured I expect the president to continue carrying out his duties without disruption while recovering, and I will keep you updated on any future developments

Ms Hicks, 31, who serves as a counsellor to the president, reportedly tested positive for the disease on Thursday, the day after she travelled with the president to a rally. She is the closest aide to Mr Trump to test positive for coronavirus so far.

She has travelled with the president a number of times during the past week, including on presidential helicopter Marine One, and on Air Force One to Tuesday night’s first presidential debate.

Several White House staffers have tested positive for the virus, including Vice President Mike Pence’s press secretary Katie Miller, and one of the president’s personal valets.

The positive tests come as the virus continues to spread at an alarming rate in the US, even as Mr Trump has tried to downplay the threat of the disease.

He has continued to hold campaign rallies which have drawn thousands of supporters during the COVID-19 pandemic.

The positive test also comes just a month before the US presidential election on 3 November.

Mr Trump’s age and weight put him at higher risk of serious complications from COVID-19. Last year, his medical revealed he met the technical threshold for obesity.

He continued to shake hands with visitors despite public health officials warning against it and also initially resisted being tested. Mr Trump also refused to wear a mask in public under almost all circumstances.

In a statement, White House spokesman Judd Deere said: “The president takes the health and safety of himself and everyone who works in support of him and the American people very seriously.

“White House Operations collaborates with the physician to the president and the White House Military Office to ensure all plans and procedures incorporates current CDC guidance and best practices for limiting COVID-19 exposure to the greatest extent possible both on complex and when the president is travelling.”

More than 200,000 people have died in the US after contracting coronavirus and more than seven million have been infected.