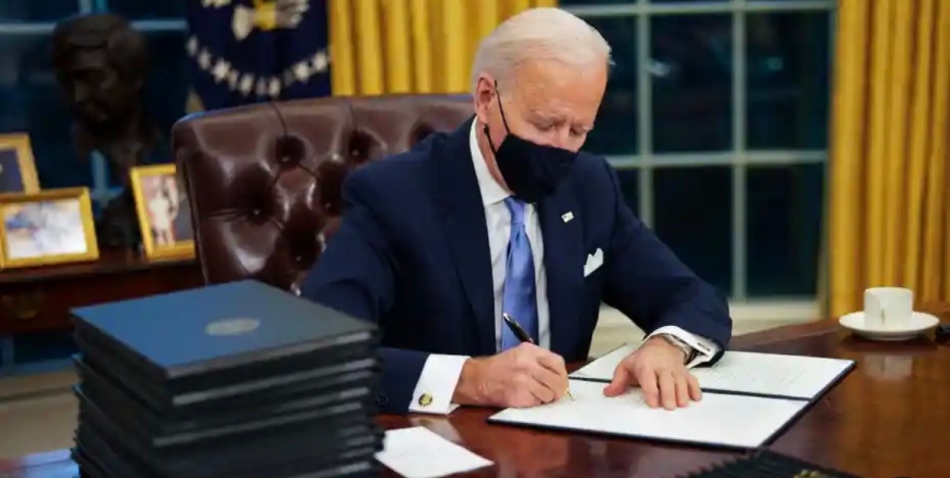 Joe Biden has marked the start of his presidency by signing a flurry of executive orders on a suite of issues, including Covid-19, the environment, immigration and ethics.

Some of the executive actions undo significant actions from Donald Trump’s administration, including halting the travel ban from Muslim-majority countries, and ending the declaration of a national emergency used to justify funding construction of a wall on the US-Mexico border.

He also signed an order allowing the United States to rejoin the Paris climate agreementand end the Trump administration’s efforts to exclude undocumented immigrants from the census data used to determine how many seats in Congress each state gets.

The president also moved quickly to address Covid-19, signing orders to mandate mask wearing and social distancing in federal buildings and lands and to create a position of a Covid-19 response coordinator.

In other moves, Biden also revoked the permit granted for the controversial Keystone XL pipeline and instructed all executive agencies to review executive actions that were “damaging to the environment, [or] unsupported by the best available science”. Biden also ordered all executive branch employees to sign an ethics pledge and placed limits on their ability to lobby the government while he is in office. The new president also ordered federal agencies to review equity in their existing policies and come up with a plan in 200 days to address inequality in them.

On his first day in office, Biden signed 17 executive actions – 15 will be executive orders.

As he began signing the orders, Biden, wearing a mask and seated behind the resolute desk said: “I think some of the things we’re going to be doing are bold and vital, and there’s no time to start like today.”

It’s not unusual for an incoming president to take executive action immediately after being sworn into office, a move meant to show the nation that the newly inaugurated president is getting to work. But the breadth and volume of Biden’s immediate executive orders underscore how quickly the new president intends to move in addressing the Covid-19 pandemic and turning the page from the Trump administration.

“These executive actions will make an immediate impact in the lives of so many people in desperate need of help,” Wade Henderson, the interim president and CEO of the Leadership Conference on Civil and Human Rights, said in a statement. “Reversing Trump’s deeply discriminatory Muslim ban, addressing the Covid-19 crisis, preventing evictions and foreclosures, and advancing equity and support for communities of color and other underserved communities are significant early actions that represent an important first step in charting a new direction for our country.”

The flurry of activity from Biden came on the same day that Democrats formally took control of the US Senate as the Rev Raphael Warnock and Jon Ossoff were formally sworn in as the two senators from Georgia. Chuck Schumer, the Democratic senator from New York, is now the Senate majority leader, while Mitch McConnell, the Kentucky Republican, is now the minority leader.

Speaking from the Senate floor Schumer was momentarily breathless, saying: “We have turned the page to a new chapter in the history of our democracy and I am full of hope.”

McConnell, in his first remarks as the minority leader, also focused on a message of unity.

“Our country deserves for both sides, both parties, to find common ground for the common good everywhere we can and disagree respectfully where we must,” he said. “The people intentionally trusted both political parties with significant power to shape our nation’s direction.”

He also praised Kamala Harris’ historic achievement after she was sworn in as America’s first female vice-president.

“All citizens can applaud the fact that this new three-word phrase ‘Madam vice-president’ is now a part of our American lexicon,” McConnell said.

Looming on the horizon is the second impeachment trial for Trump, who the US voted to impeach earlier this month. In addition to Covid-19 relief, Democrats are also expected to push legislation dealing with immigration reform and voting rights.

Even though Democrats have a majority of votes in the Senate, they still face significant obstacles to get them through. That’s because Senate rules require 60 votes to overcome a filibuster, a procedural move that can be used to halt legislation. Some progressives have called for ending the practice, which would allow Democrats to pursue sweeping legislation without GOP support, but it’s unclear if the party will do that.