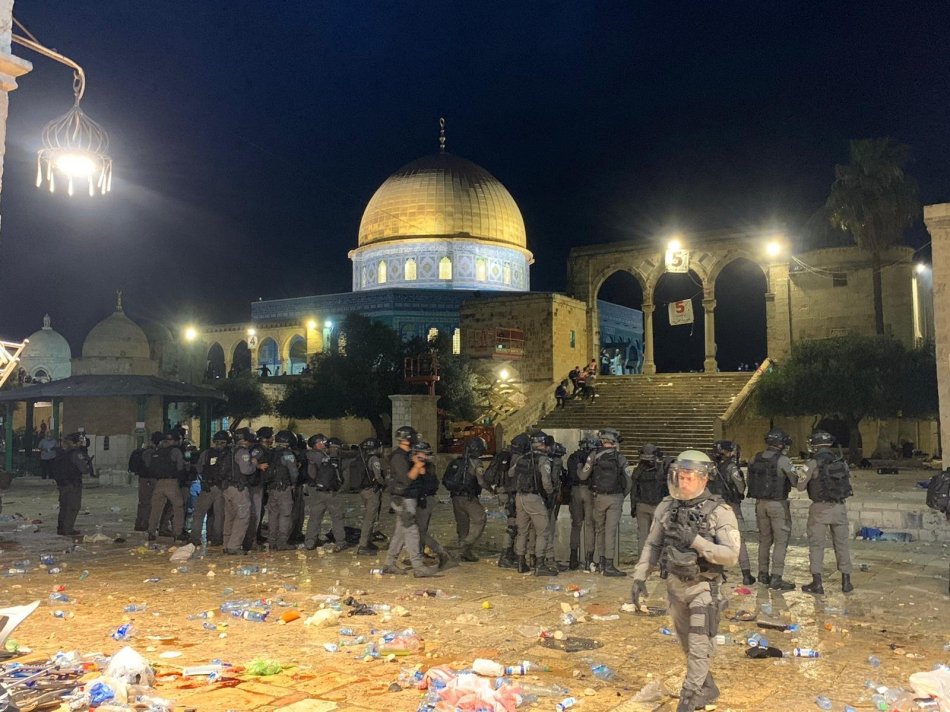 Israeli police have attacked Muslim worshippers inside the Al Aqsa Mosque in occupied East Jerusalem’s Old City as weeks-long tensions between Israel and the Palestinians over Jerusalem soared again.

The Palestinian Red Crescent emergency service said 23 people were hospitalised while most of the wounded suffered injuries to the face and eyes from rubber-coated bullets and shrapnel from stun grenades.

The clashes were the latest in a deadly day that saw Israeli forces shoot and kill two Palestinians after three men allegedly opened fire on an Israeli base in the occupied West Bank.

Protests erupted when Israeli police deployed heavily as Muslims were performing evening prayers at Al Aqsa during the holy month of Ramadan.

Dozens of Palestinians in an occupied East Jerusalem neighbourhood are at risk of being evicted following a long legal battle with Israeli illegal settlers, and Palestinian protesters have clashed with Israeli police in the city on a nightly basis since the start of the Muslim holy month of Ramadan.

The unrest has drawn attention from across the region, with neighbouring Jordan warning Israel against further “provocative” steps, and Iran seizing on the sensitivities around Jerusalem and encouraging the violence.

Some 70,000 worshippers attended the final Friday prayers of Ramadan at Al Aqsa, the Islamic endowment that oversees the site said.

Israelis and Palestinians are bracing for more violence in the coming days.

In recent days, protesters have scuffled with police and illegal settlers over the threatened eviction of dozens of Palestinians in the Sheikh Jarrah neighbourhood in occupied East Jerusalem.

Several Palestinian families in Sheikh Jarrah have been embroiled in a long-running legal battle with Israeli settler groups trying to acquire property in the neighbourhood north of the Old City.

Israel captured East Jerusalem, along with the West Bank and Gaza — territories the Palestinians want for their future state — in the 1967 Mideast war.

Israel annexed and occupied East Jerusalem in a move not recognised internationally and views the entire city as its capital.

The Palestinians view East Jerusalem — which includes major holy sites for Jews, Christians and Muslims — as their capital, and its fate is one of the most sensitive issues in the conflict.