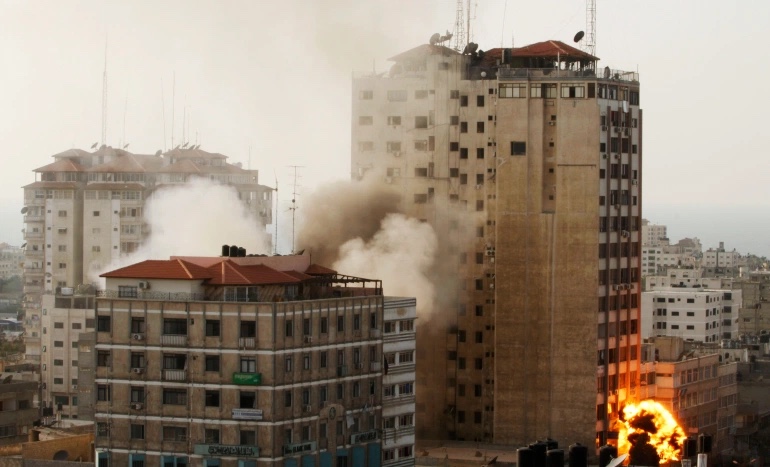 A Palestinian man was killed in an air raid that hit Bureij refugee camp located in the middle of the Gaza Strip, according to Wafa news agency.

The attack brought the total death toll in the besieged territory since Monday to 140.

Israel’s bombardment of the Gaza Strip entered its sixth consecutive day, with air raids hitting a refugee camp where at least 10 Palestinians – eight children, two women – were killed and flattening a high-rise building housing the offices of media organisations, including Al Jazeera.

Meanwhile, Palestinians on Saturday gathered in parts of the occupied West Bank to protest against continued Israeli occupation and the ongoing bombardment of Gaza. Solidarity rallies were also being held around the world to mark Nakba Day or “The Catastrophe”, when the ethnic cleansing of 750,000 Palestinians by Zionist militias took place to create the state of Israel.

At least 140 Palestinians, including 39 children, have been killed in the Gaza Strip since Monday. Some 950 others have been wounded. In the occupied West Bank, Israeli forces have killed at least 13 Palestinians. Confrontations between Israeli police and Palestinian demonstrators continued into the night in occupied East Jerusalem.

At least nine people in Israel have also been killed, with one new death reported on Saturday in Ramat Gan. The Israeli army said hundreds of rockets have been fired from Gaza towards various locations in Israel and they have added reinforcements near the enclave’s eastern lands.

As violence escalates, the humanitarian crisis grows steadily worse with thousands of Palestinian families taking shelter in United Nations-run schools in northern Gaza to escape Israeli artillery fire. The UN has said it estimates approximately 10,000 Palestinians have left their homes in Gaza amid the Israeli offensive

Israel has razed to the ground a high-rise building housing residential apartments and media offices in Gaza City, including Al Jazeera Media Network and The Associated Press news agency.null

Live video showed the 11-storey al-Jalaa building, which also houses a number of other offices, crashing to the ground after being bombed as dust and debris flew into into air.

Al Jazeera’s Safwat al-Kahlout reacted to the destruction of the building housing, among others, the offices of Al Jazeera Media Network in Gaza City:

“I have been working here for 11 years. I have been covering many events from this building, we have lived personal professional experiences now everything, in two seconds, just vanished,” he said.

“All my colleagues, despite the sadness, they didn’t stop a second – they were looking for an alternative just to keep Al Jazeera on top of the news.”

Al Jazeera’s Harry Fawcett, who has extensively reported from Gaza City, added: “This is a very personal moment for all of us. The idea that the place is not there any more is extraordinary to contemplate.”