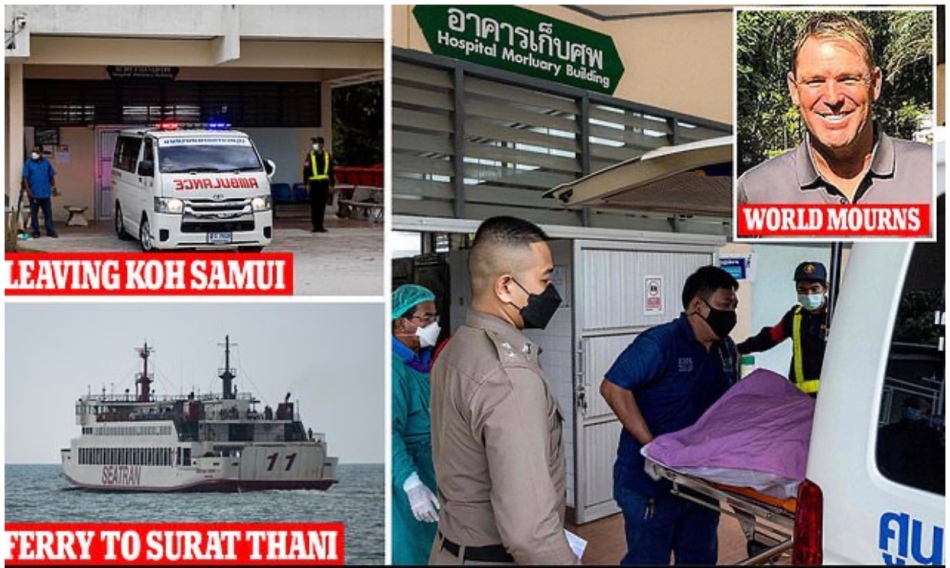 Shane Warne suffered chest pains before he travelled to Thailand for a holiday, where the cricket great died from a suspected heart attack on Friday, Thai police say.

Warne’s body was picked up from Koh Samui Hospital on Sunday morning at 10am local time in a motorcade flanked by the Australian ambassador and local police officers. The grim procession departed the island by ferry bound for Surathani hospital on the mainland where an official autopsy will be performed.

Citing information from his family, police said on Saturday Warne, 52, had asthma and heart issues and his death on the island of Koh Samui is not being treated as suspicious.

Warne was staying in a private villa with three friends, one of whom performed CPR after finding him unresponsive when he did not show up for dinner.

It is believed the last interaction he had was with staff from a massage shop who visited the villa.

“We got a request to do a massage at the villa around 4pm,” the owner of the shop, who asked not to be named, told the Guardian. “They ordered two masseusse. Warne ordered a Thai massage and he asked to focus on his back. He looked lively and happy. When it was done he gave a tip and thanked the masseuse.”

The owner said Warne did not mention any pre-existing medical conditions.

It comes as Australian ambassador to ThailandAllan McKinnon visited Koh Samui on behalf of the Warne family. After meeting with Royal Thai Police, he told media the superintendent and hospital staff were facilitating the return of Warne’s body to Australia as quickly as possible.

“It will be an opportunity for Victorians to pay tribute to his contribution to his sport, to our state and the country,” Andrews tweeted on Sunday.

Details of the service will be finalised “in coming days”, he said.

Newspapers, celebrities, politicians and adoring fans lined up to recall their memories of the legendary leg spinner after the shock news of his death.

Others left flowers, meat pies, beers and cigarettes at his statue outside the Melbourne Cricket Ground, where the southern stand will be renamed the S.K. Warne Stand in his honour.

Hollywood star Russell Crowe tweeted he was having a hard time accepting the news.

Rolling Stones frontman and passionate cricket fan Mick Jagger tweeted: “He brought such joy to the game and was the greatest spin bowler ever”.

Australia’s mens cricket team wore black armbands and held a minute silence for Warne on the second day of the Test in Pakistan.

Former players who had served on the cricket pitch at the same time as Warne expressed their shock and devastation at the news.

“The highlight of my cricketing career was to keep wicket to Warnie,” he tweeted.

“Best seat in the house to watch the maestro at work. Have often felt a tad selfish, that Heals and I pretty much exclusively are the only ones who had that thrill and pleasure at Test level.”

Prime minister Scott Morrison offered his condolences to the Warne family in a written statement.

“Shane was his own man, following his own path,” Morrison said.