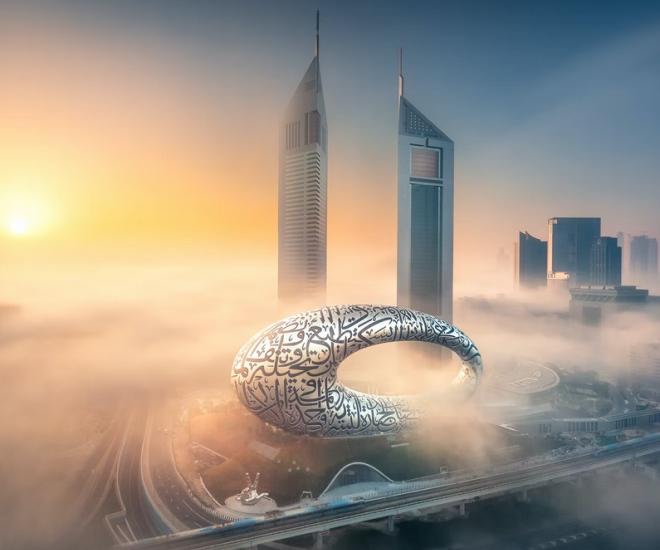 The Museum of the Future is one of National Geographic’s most beautiful museums in the world. The impressive structure seeks to shape humanity’s progression through technological innovation.

The Museum of the Future in Dubai opened last week and has since been called “the most beautiful building in the world” by UAE vice president Mohammed bin Rashid Al Maktoum.

After a two-month delay, the futuristic museum opened its doors on 22 February 2022. The palindrome day is considered the most exceptional date in over a decade — a fitting launch day for a magnificent structure.

Located in Dubai’s Financial District, the structure is just a short walk from the world’s tallest building, the Burj Khalifa skyscraper. The seven-story building is 77 meters tall and covers an area of 30,548 square metres. The whole area is symbolic. The building’s unique oval shape represents humanity; the green mound below represents the earth; the void represents the unknown future.

Designed by architecture firm Killa Design and led by Shaun Killa, the building has already been listed as one of National Geographic’s most beautiful museums. The magazine commended the Museum of the Future to have astonishing architecture craft from refined materials “boosted by technological innovations including 3D modelling and parametric construction”.

On its exterior, Arabic calligraphy envelopes the circular building as windows. The calligraphy was a quote from the Dubai ruler, who said: “Innovation is not an intellectual luxury. It is the secret behind the evolution and rejuvenation of nations and peoples.”

The architectural marvel has no internal columns and is supported by a steel structure that was “digitally grown” using parametric tools. The museum was co-constructed alongside engineering consultancy Buro Happold.

The museum was built for the Dubai Future Foundation, which was set up in 2016 to institutionalise future-shaping. The belief is that leading in the present is not enough. It is the future that humankind must imagine, design, and execute.

Envisioned by a team of visionary designers, artists, and filmmakers, the museum is curated to be a blend of exhibitions, immersive theatre, and themed attractions. Each specific floor is dedicated to various experiences. Three of the floors are immersive exhibitions that feature health and wellbeing, ecosystems and bioengineering, as well as outer space resource development.

Other floors will demonstrate near-future technologies aiming to revolutionise the world. There is also a floor for children to explore and solve challenges. Additionally, the museum contains many laboratory spaces, a 1,000-capacity multi-use hall, and a 345-seat lecture theatre.

As per Mohammed Al Gergawi, chairman of the Dubai Future Foundation, on dezeen: “The Museum of the Future is a ‘living museum’, constantly adapting and metamorphosing as its very environment drives continual and iterative change to its exhibits and attractions.”