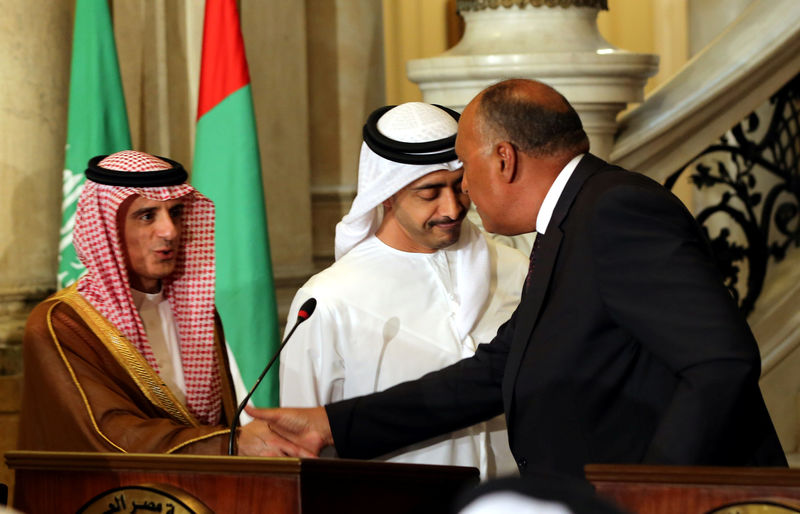 Manama (MDW Live) – Four Arab countries boycotting Qatar are ready for dialogue to ease the dispute if Doha agrees to certain demands, Bahrain’s foreign minister said on Sunday after a meeting with his counterparts.

Bahrain’s Foreign Minister Sheikh Khalid bin Ahmed al-Khalifa started off by saying that the four countries  are united and consistent in being keen on Arab national security.

“The four countries are ready for dialogue with Qatar with the condition that it announces its sincere willingness to stop funding terrorism and extremism and its commitment to not interfere in other countries’ foreign affairs and respond to the 13 demands.”

He was speaking at a televised news conference in Manama after meeting with his Saudi, Emirati and Egyptian counterparts to discuss the dispute. Saudi Arabia, the United Arab Emirates, Egypt and Bahrain have previously issued a list of demands for Qatar.

Saudi Arabian foreign minister ‎Al-Jubeir said Saudi Arabia welcomes Qatar citizens to perform Hajj like the other pilgrims and reject Doha’s claims that Daudies were politicizing Hajj. He added that  further measures must be line with international law and that there are a range of other steps can be taken against Qatar but were mindful of the effect on to citizens of Qatar.

The Bahrain foreign minister added that ‘We are prepared to engage in negotiation but based on solid foundation of implementation. There is no negotiations on 13 demands and 6 principles. Until Doha does something tangible current situation  it is as it is and difficult to optimistic”