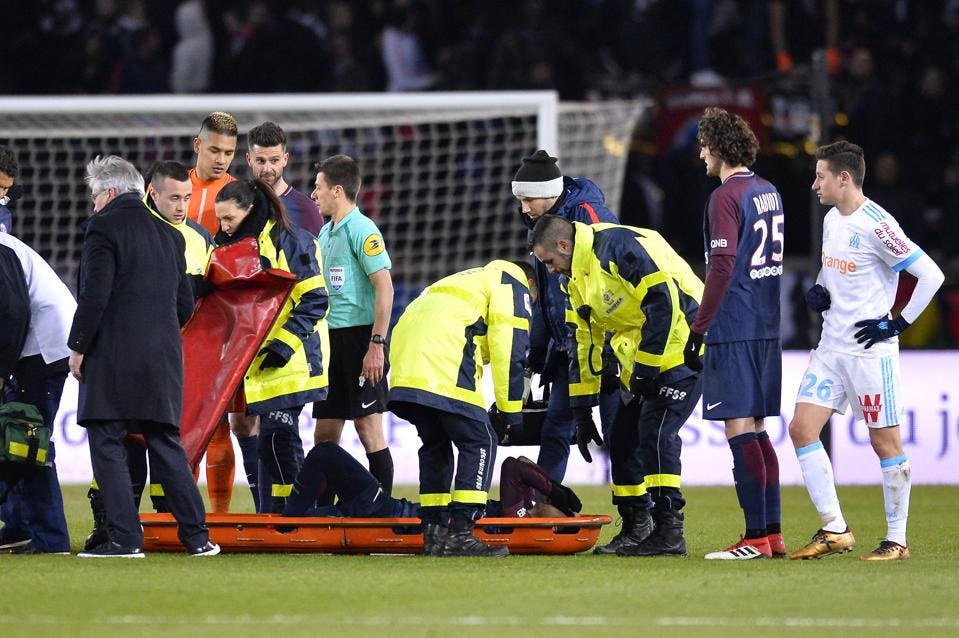 Neymar about to be carried off and being injured in the PSG game against Olympique Marseille. (Photo by Aurelien Meunier/Getty Images)

It looks like Paris Saint-Germain will have to overturn a 3-1 Real Madrid lead in the second leg of the UEFA Champions League round of 16 game on March 6 without their Brazil superstar Neymar.

The PSG striker was carried off the field on Sunday after a tangle with Marseille player, Bouna Sarr.

Neymar’s status for #PSG against Real Madrid will be in question after this nasty ankle injury … pic.twitter.com/krFQTavVgG

The incident came late in the game with PSG leading 3-0. PSG had already used all their substitutes and played out the remaining 14 minutes of the game with just 10 players.

After the Marseille game, PSG Coach Unai Emery was optimistic that Neymar would be fit for the game in just over a week.

“It is just a twist, but we will do more tests. He is cautious, but we must be optimistic, and if I have to say now if he will be able to play against Real Madrid, I would say yes,” said Emery in a post-game press conference.

Originally described as an ankle injury, the PSG medical staff confirmed that Neymar had been assessed and found to have suffered “a sprain of the right ankle and fissure of the fifth metatarsal”.

Such injuries to metatarsals (five bones in the foot) can be problematic in terms of recovery time but generally, a player will be out for 6 to 8 weeks.

The PSG medical staff did not speculate how long Neymar might be missing from the line-up.

At the 2014 World Cup in Brazil Neymar missed the semi-final against Germany after injuring his back in a quarter-final win over Colombia.

PSG was dealt another setback when it was confirmed that center-back Marquinhos has torn his left quadricep.

PSG leads Ligue Un in France by 14 points with 11 matches remaining and Neymar’s availability is irrelevant to the eventual crowning of PSG as French champions.

However, the Champions League is something completely different and the loss of Neymar is a massive psychological and technical blow to PSG’s chances.

PSG spent over $250m to trigger Neymar’s release clause from Barcelona last summer and he has scored 29 goals in 30 games for his new team this season.

Despite dominating French soccer since Qatar Sports Investments (QSI) bought the team in 2011 and spending close to a $1b on player transfers the UEFA Champions League has proven to be a trophy beyond their reach.

Four times PSG has been knocked out at the quarter-finals stage and a year ago they exited in the round of 16 despite beating Barcelona 4-0 in the first leg.

Thanks to Bobby McMahon, CONTRIBUTOR –Forbes