A severe cyclone is forecast to pound the southern coast of Oman in the coming days, shortly after another major storm in the Arabian Sea devastated parts of Somalia and Yemen.

Cyclonic Storm Mekunu is predicted to strengthen to a category 2 or 3 strength hurricane this week and is expected to make landfall on the Yemen-Oman border on Saturday.

Mekunu is currently a very severe cyclonic storm with winds equal to a Category 2 hurricane in the Atlantic or east Pacific Ocean.

A north to northwest track in the coming days will bring the risk for life-threatening impacts to Socotra, Oman and Yemen.

Socotra has already felt impacts from Mekunu as the storm passes just north of the island, continuing waves of rain and wind.

Yemen declared a state of emergency on Socotra on Thursday after a tropical storm flooded several villages and capsized boats on the island and left at least 17 people missing, government officials said.

Socotra, which lies between the Arabian Peninsula and Horn of Africa, has been largely untouched by a three-year-old war in Yemen and is under the control of the internationally recognized government whose president remains in exile in Saudi Arabia. 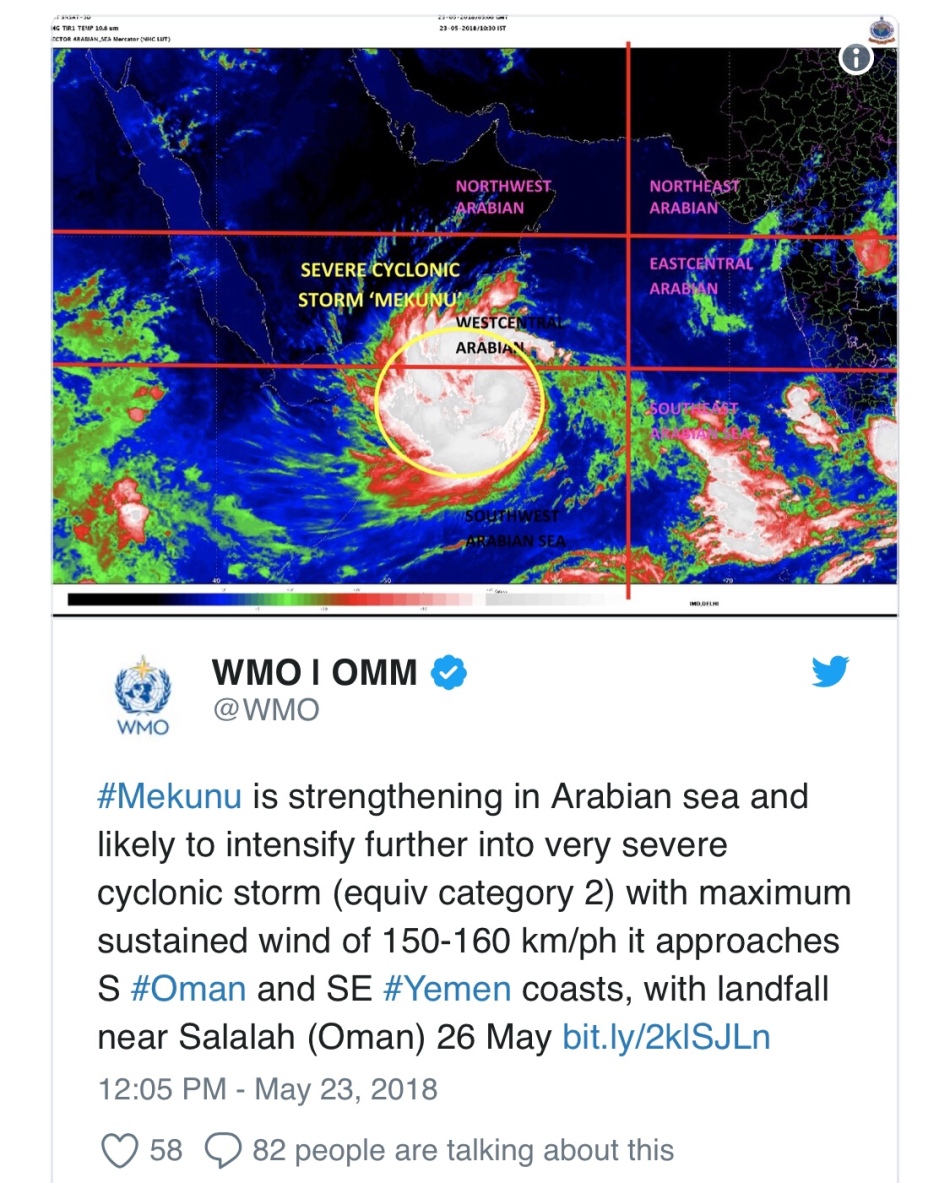 The island “requires urgent aid to help people stranded in their villages or those who reside in the mountains”, government spokesman Rajeh Badi told the state news agency SABA.

Tropical Cyclone Mekunu is threatening Oman’s southern coast near Salalah, as well as the eastern portion of neighbouring Yemen.

Meanwhile Salalah Airport will be closed to air traffic from midnight tonight (12:00 am on May 25) for at least 24 hours, with Cyclone Mekunu approaching Oman’s southern coasts, the Public Authority for Civil Aviation (PACA) said.

The authority could extend the closure further, depending on weather conditions.

The cyclone is around 800km from Salalah, Oman’s second city, which is home to one of the sultanate’s biggest ports.

The storm is approaching from the Arabian Sea and is expected to reach cyclone strength tonight.

Meteorologists in Oman expect heavy rainfall, strong winds and up to eight metre waves, when the cyclone makes landfall.

The US embassy in Muscat posted a warning on its Facebook page, instructing citizens to avoid travel to affected areas, monitor local media, and seek secure shelter.

Mekunu development has occurred barely a week after another cyclone, Sagar, formed in the same region. Sagar became one of very few cyclone to pass right through the Gulf of Aden, and it was the strongest such cyclone to hit Somalia, leaving around 30 people dead and causing devastation to crops and livestock.

0 comments on “Powerful Cyclone Mekunu bears down on Oman, Yemen, expected to make landfall on the weekend”