Rescuers are working to free 12 boys and their football coach who have been found alive nine days after going missing in a flooded cave in Thailand.

Dramatic video shared on the Facebook page of the Thai navy Seals showed the moment the emaciated youths, huddled onto a sliver of dry ground surrounded by water, were found by two British divers. 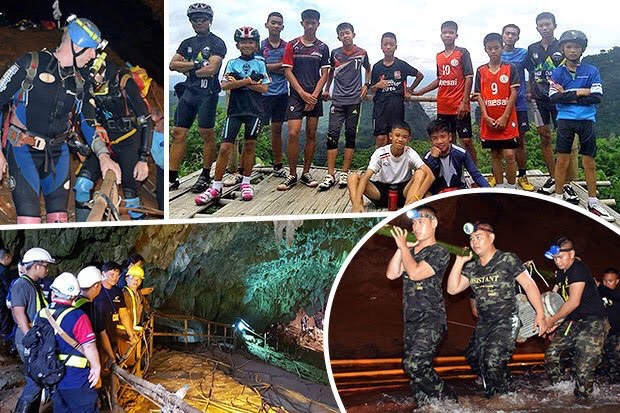 Lit by feeble torchlight, the exhausted group asked for food and whether they could leave the cave as one of the divers urges them to stay calm. Asked how many of them there were, a child said: “Thirteen.” The diver replied: “Thirteen? Brilliant!”

The boys, aged 11 to 16, and their 25-year-old coach went missing after entering the cave on 23 June and becoming trapped by rising floodwater, prompting a desperate round-the-clock search beset by torrential downpours that stopped divers going in.

Another child said: “We are hungry … Shall we go outside?” The unidentified diver replies: “I know, I understand … No, not today.” He explained that they had to go, but others will come: “Many, many people are coming … We are the first”.

One of the two divers, named by the BBC as Rick Stanton and John Volanthen, who were flown into Thailand early last week, explained it was “Monday … You have been here for 10 days, you are very strong.”

The governor of Chiang Rai province, Narongsak Osottanakorn, said earlier the group had been found in the six-mile Tham Luang Nang Non cave, on the border with Laos and Myanmar, “all with signs of life”.

In comments broadcast nationwide, he said the 13 were in the process of being rescued, but warned that he did not know their condition and they were not out of danger yet. “We found them safe. But the operation isn’t over,” he said.

Pictures from the scene showed joyful relatives who had clustered near the cave in an increasingly fraught vigil looking at a photograph on an iPad taken by one of the rescue divers, which showed four of the boys smiling and looking in good health.

“I’m so glad … I want him to be physically and mentally fit,” said Tinnakorn Boonpiem, whose 12-year-old son, Mongkol, is also among the 13.

“I found out from the television … I’m so happy I can’t put it into words,” another relative of one of the group told television reporters, tears of joy streaming down his cheeks.

As the days wore on with the group missing, distraught family members placed fruit, desserts, sugary drinks and sweets on mats near the cave as an offering to the mountain spirits which some people believe protect the cave and the forest. Shamans and Buddhist monks held prayers at the cave mouth imploring the spirits to return the boys safely.

The international rescue effort has gripped Thailand for more than a week. Cave diving experts flew in from the UK, and 17 US air force rescue and survival specialists travelled from Japan to join the 132 Thai army, navy and police officers working day and night to try to find the group.

US navy Seals reached a T-junction deep into the cave, one or two miles from where the boys were believed to be, on Saturday. Other divers including Thai Seals made progress through the passageway on Monday, after the high waters began to recede.

Narongsak said medical teams have been sent inside the cave and it would take them around four hours to assess the group’s health and how fit they are before coming up with a strategy to get them out.

The divers located the missing group about 300-400 metres past a section of the cave that was on higher ground and was thought to be where the team members and their coach may have taken shelter.

“When the medics have evaluated the kids, we will care for them until they have enough strength to move by themselves, and then we will evaluate the situation on bringing them out again later,” Narongsak said.

Earlier on Monday divers took advantage of a brief window of good weather to edge further into the cave, with the water levels dropping slowly but steadily every hour thanks to round-the-clock pumping.

Narongsak explained that the divers had fixed rope lines along the passageway and distributed oxygen tanks along their route, allowing them to advance through the exceptionally narrow passageway unencumbered by bulky equipment. Other teams worked to pump out floodwater and divert groundwater, he said.

It remains unclear whether any of the group are injured or in need of medical attention, but they have been given energy gels to sustain them while a plan is worked out to bring them to safety.

The boys are around a mile and a half underground in an area known as Patia beach, and it could be days until they are successfully brought to the surface. The director of the school where half the boys go said they only had two to three days of food with them.

“These are challenging conditions and there’s a lot of consideration for safety as well as the environment outside contributing to the environment inside,” said Jessica Tait, a US air force captain who is part of the operation.

Tait, who joined the Thai-led international rescue mission from her base in Okinawa, Japan, told Sky News that the rescue operation was “not done” quite yet.

“We need to start thinking about isolated personnel, and it’s about being able to bring them back safely,” she said, paying tribute to the boys’ “mental fortitude”, because people can survive in unideal conditions if the “heart is there”.

Thailand’s prime minister, Prayuth Chan-ocha, thanked the international experts and rescuers who helped locate the missing for their “tremendous efforts”.

The Thai government and Thai people “are grateful for this support and cooperation, and we all wish the team a safe and speedy recovery,” Prayuth’s office said.

The boys, members of the Moo Pa academy, reportedly knew the site well and had visited it many times before, buoying hopes that they might have trekked to a large airy chamber in the centre.

They cycled to the cave with their coach after football practice and are thought to have crawled in through a narrow 15-metre tunnel that became completely flooded due to almost non-stop heavy rain.

Rescuers found their bicycles, football boots and backpacks near the cave’s entrance and discovered handprints and footprints further in. Aektrakoon Suwanmard, a member of the football team, said he went to practice with the team on the day they went missing but opted against going inside the cave because he had to go home early. 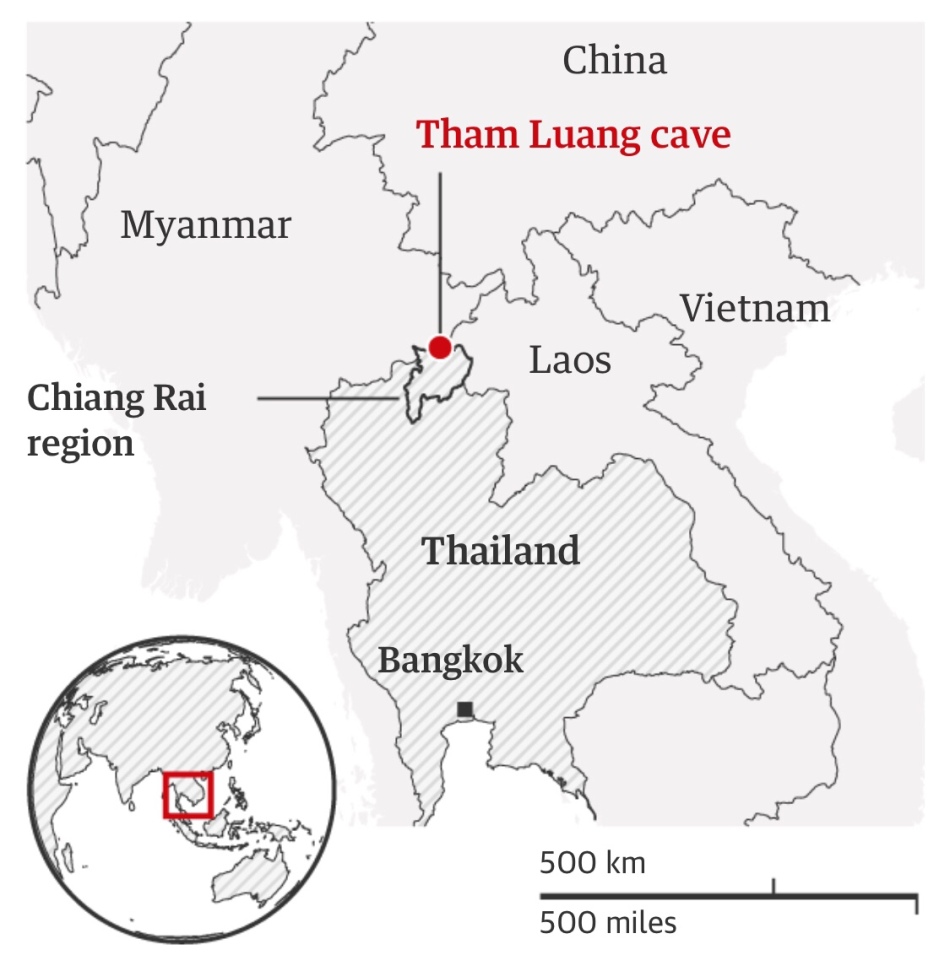 Tham Luang cave is one of Thailand’s longest and one of the toughest to navigate, with snaking chambers and narrow passageways. A sign outside the site warns visitors not to enter the cave during the rainy season between July and November.

In a complex and potentially dangerous operation, rescue workers will now have to assess how to bring the group several miles through the cave, which is still partially submerged and is linked by tight passages.

Anmar Mirza, a leading American cave rescue expert, told Associated Press many challenges remained. He said the primary decision was whether to try to evacuate the boys and their coach or to feed supplies through to them.

“Supplying them on site may face challenges depending on how difficult the dives are,” said Mirza, the coordinator of the US National Cave Rescue Commission.

“Trying to take non-divers through a cave is one of the most dangerous situations possible, even if the dives are relatively easy. That also begets the question: if the dives are difficult then supply will be difficult, but the risk of trying to dive them out is also exponentially greater.”