Weeks after Liverpool paid a world record fee for Brazil No.1 Alisson, Chelsea is edging closer to eclipsing the mark set by its English Premier League rival after Athletic Bilbao keeper Kepa Arrizabalaga paid his release clause of £71m
Wednesday, allowing him to leave the La Liga outfit ahead of a proposed move to London.
Should the deal be completed, it would be more than the £66.8million Liverpool paid for Alisson in July and would also be a club record purchase, surpassing the  £68 million million Chelsea spent on striker Alvaro Morata last summer.
In a statement issued on its website, Athletic confirmed Kepa had activated his release clause, adding: “Athletic thanks the player for his contribution during the time he has remained in our club.”
In Spain, a player has to buy himself out of his contract. The funds are then deposited with La Liga to trigger the release clause in the player’s contract before being transferred to the selling club.
Ultimately Chelsea would pay the fee, though the London club has yet to publicly comment on the transfer.
It has been widely reported that Kepa, 23, will replace Thibaut Courtois as Chelsea’s No.1 — the Belgian goalkeeper has failed to report for training in recent days.
Real Madrid has been linked with Courtois, 26, though the Spanish club’s coach Julen Lopetegui refused to comment on the speculation during a press conference Wednesday.
Spain No.2 Kepa, who has made one appearance for his country, could make his debut in Saturday’s Premier League game against Huddersfield if the deal goes through. 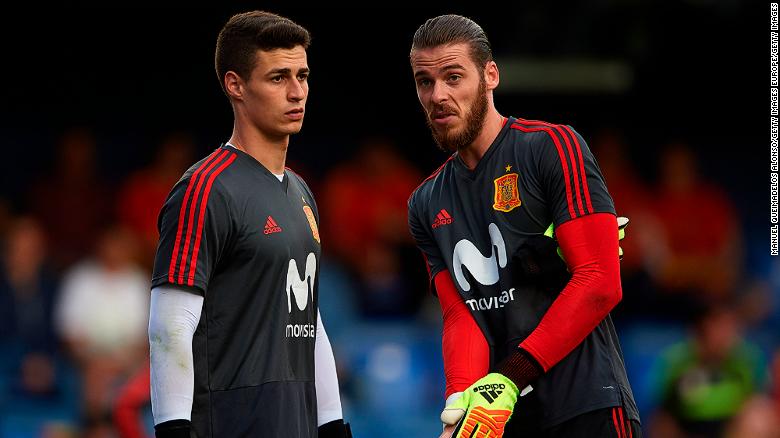 Kepa is behind Manchester United’s David de Gea in Spain’s pecking order.
“I saw him one year ago [when I was] at Naples, and my first impression was he was a very good goalkeeper,” said Chelsea boss Maurizio Sarri after the London club’s goalless draw with Lyon in a friendly Tuesday. “Very young, but very, very good.”
Visit cnn.com/sport for more news and videos.
Kepa was on the verge of signing for Real in January for $21 million but then boss Zinedine Zidane pulled the plug on the deal.
The young stopper consequently signed a new six-year deal with Bilbao which elevated his release clause to $91 million.