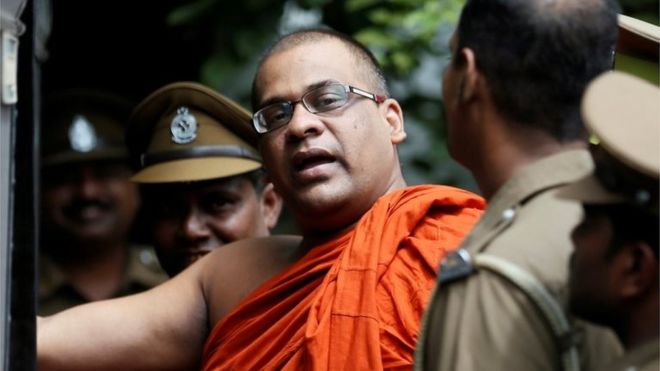 COLOMBO (Reuters) – A Sri Lankan court on Wednesday handed a six-year jail term to a Buddhist monk accused of inciting violence against Muslims, holding him guilty of contempt just months after he was convicted of intimidating the wife of a missing journalist.

The monk, Galagoda Aththe Gnanasara, leads the hardline Bodu Bala Sena (BBS) or “Buddhist Power Force”, which government ministers and Muslims have accused of stirring up violence against Muslims and Christians, allegations he has denied.

The court sentenced him to six years’ rigorous imprisonment over a 2016 incident when Gnanasara interrupted a court hearing on the abduction of the journalist, Prageeth Eknaligoda, in which military intelligence officials were accused.

He shouted at the judge and lawyers because the military officials had not been given bail, and threatened Eknaligoda’s wife.

“The convict intentionally committed the offence to undermine the judiciary,” Preethi Padman Surasena, the president of the court of appeal, said in delivering Wednesday’s judgment, adding, “Found guilty of all charges beyond reasonable doubt.”

The monk was convicted on four counts of contempt of court, receiving terms of four years each on the first and the second counts, six years on the third and five for the fourth, all to run concurrently.

A BBS official told Reuters the group would appeal against Wednesday’s ruling.

“We feel there is an attempt by interested parties to have judicial process targeting Gnanasara, therefore, though we do not agree with the judgment, we accept the sentence, and we will appeal,” said Dilantha Vithanage, the group’s chief executive.

Gnanasara, who is being treated in hospital for an ailment, was not in court for the ruling. He has been on bail since filing an appeal against a conviction in a separate case on June 14.

In that case, he received two concurrent jail terms of six months, a fine of 1,500 rupees ($9.39), and a compensation payment of 50,000 rupees ($313) for having threatened the journalist’s wife, Sandhya Eknaligoda.

Since 2014, the monk has faced accusations in cases regarding anti-Muslim violence, hate speech, and defaming the Koran, the Muslim holy book.

That year Gnanasara signed a pact with Myanmar’s Ashin Wirathu, who once described himself as “the Burmese bin Laden”, in what the duo called a bid to counter regional conversion efforts by Islamists.