The United States said Friday that it had canceled more than $200 million in aid for the Palestinians in the Gaza Strip and West Bank, leading their ambassador to accuse President Donald Trump’s administration of being “anti-peace.”

A senior State Department official said the decision, made “at the direction of the president,” came after a review of aid programs to the Palestinian territories.

The funding previously allocated for programs in the West Bank and Gaza will “now address high-priority projects elsewhere,” said the official.

The move “takes into account the challenges the international community faces in providing assistance in Gaza, where Hamas control endangers the lives of Gaza’s citizens and degrades an already dire humanitarian and economic situation,” he said.

In January, the United States had already made drastic cuts to its contribution to the UN agency for Palestinian refugees UNRWA.

Relations between the US administration and the Palestinian Authority took a nosedive after Trump announced the US decision to recognize Jerusalem as Israel’s capital.

The Palestinians have suspended contacts with the administration and consider that it can no longer play a mediation role in the Middle East peace process.

“This administration is dismantling decades of US vision and engagement in Palestine,” Husam Zomlot, head of the Palestinian General Delegation to the United States said in a statement.

“After Jerusalem and UNRWA, this is another confirmation of abandoning the two-state solution and fully embracing (Israeli Prime Minster Benjamin) Netanyahu’s anti-peace agenda.”

The decision to cut Palestinian funding comes amid a humanitarian crisis in Gaza, which has seen a surge of violence since Palestinian protests began in March.

At least 171 Palestinians have been killed by Israeli fire during demonstrations near the border with Israel.

The US administration is pressing on with work on a peace plan that has been under discussion for months, leaving a vacuum in the Middle East in the meantime.

“Weaponizing humanitarian and developmental aid as political blackmail does not work,” Zomlot said.

“Only a recommitment from this administration to the long-held US policy of achieving peace through the two-state solution on the 1967 borders with East Jerusalem, the capital of the state of Palestine, and respecting international resolutions and law will provide a way forward.”

Democratic Senator Patrick Leahy accused the White House of engaging in a “series of provocative and harmful acts” instead of coming up with a coherent policy to address the Israeli-Palestinian conflict.

Trump has tasked his son-in-law Jared Kushner and lawyer Jason Greenblatt to draft the peace proposals, saying earlier this week that there would be something “very good” for the Palestinians.

The Palestinians see the eastern part of the disputed city as the capital of their future state.

Dan Shapiro former US ambassador to Israel (2011- 2017) tweeting his displeasure and concern said that it was “a terrible decision. This aid does not go to the PA. It supports Palestinian humanitarian programs and helps ensure a more secure environment for Israelis & Pals. Palestinian conditions will worsen, Israel will need to pay more to fill the gaps, and everyone will be less secure.” 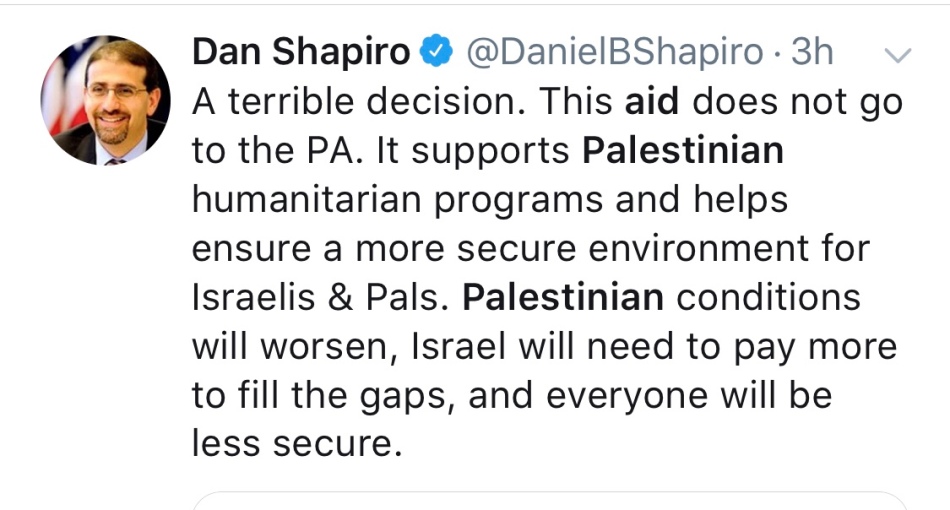 He continued in a series of six further tweets “Nearly every year since the 1990s, the US Palestinian aid program faced holds & other delays in Congress. Clinton, Bush, & Obama Admins had to negotiate to free the money. And you know who the most effective lobbyist was to get Congress to relent? The Israeli Embassy in DC.

Why? Because successive Israeli govts, deeply informed by their security services, saw great value in the program providing for Palestinian humanitarian needs, in part so Israel didn’t have to & in part because it provided a more secure environment for Israelis & Palestinians.

That was true under PM’s Rabin, Peres, Netanyahu (first term), Barak, Sharon, Olmert, and nearly every year of Netanyahu’s current premiership. I know first-hand that the IDF and Shin Bet leaderships continue to strongly support these programs.

Not sure what was communicated to the Trump Admin this year, but a change this dramatic is implausible. More likely, this decision represents a terrible decision by Trump’s team, which seems to think it will put pressure on the Palestinians to come to the table (it won’t).

The Taylor Force Act prevents US aid from even indirectly supporting payments to terrorists. This aid, which doesn’t go to the PA, has been vetted to extreme levels & passed with flying colors, as @Dave_Harden has shown. So none of those issues are relevant to this decision.

But with neither Israel nor the Palestinians interested in negotiations & Trump unwilling to even define 2 states as the goal, he now acts recklessly to remove one of the key factors that has helped ensure stability in the West Bank even in times of crisis & stalemate. Why? xx”