COLOMBO: Sri Lanka’s Muslim ministers resigned en masse on Monday (Jun 3) over widespread hate attacks against their community in the wake of the Easter Sunday bombings that hit the majority Buddhist nation.

Demonstrations by several thousand people gripped the central pilgrim city of Kandy as monk Athuraliye Ratana insisted governors of two provinces and a cabinet minister be sacked over their alleged involvement with terrorists responsible for the bombings. 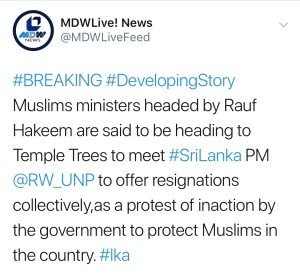 Even as shops and offices were closed in the city 115 kilometres (70 miles) east of Colombo, the two provincial governors stepped down, Sirisena’s office said.

Within hours, the nine legislators, belonging to several Muslim and mainstream parties, resigned saying they were giving up their portfolios to ensure free investigations into the Easter attacks.

The nine included Commerce Minister Rishad Bathiudeen, the cabinet minister whose sacking had been demanded by Ratana and also the

Muslim leaders said their community – which consists of 10 per cent of Sri Lanka’s 21 million population – had become victims of violence, hate speech and harassment since extremists were held responsible for the bombings.

He said the Muslims were giving up their portfolios in the hope that the authorities will fully investigate the allegations against members of their community within a month.

The ministers who quit Monday will remain loyal to the government of Prime Minister Ranil Wickremesinghe, they said in a joint statement.

Inside Kandy’s famed Temple of the Tooth, where Buddhists believe a tooth of the Buddha is enshrined, prominent monk Ratana ended what he had called a “death fast” since the weekend after the first two resignations. 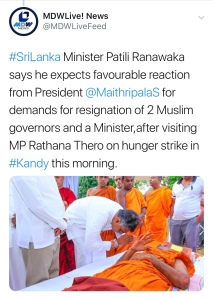 The monk was taken away in an ambulance for medical treatment. Also present earlier in the day was Galagodaatte Gnanasara, a firebrand monk released from jail on a presidential pardon late last month who has long been accused of instigating hate crimes against Muslims.

Buddhist monks accuse the three Muslim leaders of supporting the extremists responsible for the Apr 21 attacks on three churches and three hotels that killed 258 people including 45 foreigners.

The recently pardoned from a prison sentence, the General Secretary of Bodu Bala Sena, Gnanasara Thero continued his rhetoric against Muslim ideologies and demanding Muslim politicians to resign.

The head of the Catholic Church in Colombo, Cardinal Malcolm Ranjith, also travelled to Kandy on Monday to express solidarity with Ratana.

“We support the monk’s campaign because so far justice has not been served,” Ranjith told reporters in Kandy.

The government has said nearly 100 people linked to the National Thowheeth Jama’ath (NTJ) have been arrested since the attacks.

In the wake of the bombings, anti-Muslim riots spread in towns north of the capital killing one Muslim man and leaving hundreds of homes, shops and mosques vandalised.

“The demonstrations fizzled out peacefully by afternoon,” a police official told AFP.

Sri Lanka is under a state of emergency since the Easter attacks. Police and troops have been empowered to arrest and detain suspects for long periods.

In March last year, a week of anti-Muslim riots in a suburb of Kandy left three people dead and more than 20 injured.

More than 200 Muslim-owned homes and shops were also destroyed and the government clamped a brief state of emergency in the area to contain the violence.