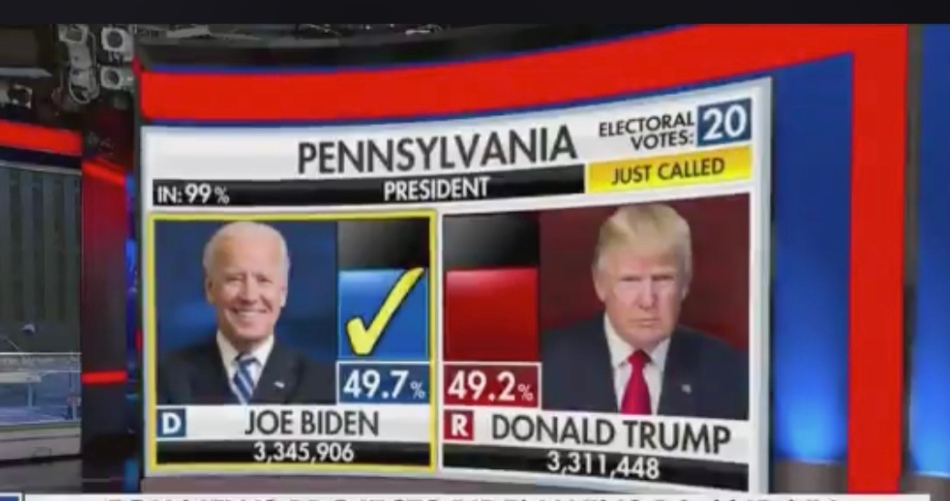 Joe Biden has won the race to become the next US president, defeating Donald Trump following a cliff-hanger vote count after Tuesday’s election.

The projections that Mr Biden has won the key battleground of Pennsylvania, propelling him over the 270 electoral college vote threshold required to clinch the White House.

The Trump campaign has indicated their candidate does not plan to concede.

The result makes Mr Trump the first one-term president since the 1990s.

The election has seen the highest turnout since 1900. Mr Biden has won more than 73 million votes so far, the most ever for a US presidential candidate. Mr Trump has drawn almost 70 million, the second-highest tally in history.

President Trump had falsely declared himself the winner of the election when vote counting was unfinished. He has since alleged irregularities in counting, but has not presented any evidence of election fraud.

His campaign has filed a barrage of lawsuits in various states and earlier on Friday, as Mr Biden appeared on the cusp of victory, said: “This election is not over.”

The election was fought as coronavirus cases and deaths continued to rise across the United States, with President Trump arguing a Biden presidency would result in lockdowns and economic gloom. Joe Biden accused the president of failing to impose sufficient measures to control the spread of Covid-19.

Joe Biden is now set to return to the White House, where he served for eight years as President Barack Obama’s deputy. At the age of 78, he will be the oldest president in American history, a record previously held by the man he has now defeated, Donald Trump, who is 74.

Joe Biden’s projected victory after four days of painstaking vote-counting is the denouement of an extraordinary campaign, conducted during a devastating pandemic and widespread social unrest, and against a most unconventional of incumbents.

In his third try for the presidency, Mr Biden found a way to navigate the political obstacles and claim a win that, while perhaps narrow in the electoral college tally, is projected to surpass Mr Trump’s overall national total by at least four million votes.

With his projected victory, Joe Biden becomes the oldest man ever elected to the White House. He brings with him the first woman vice-president, whose multi-ethnic heritage carries with it numerous other firsts.

Mr Biden can now begin the arduous task of planning the transition to his new administration. He will have just under three months to assemble a cabinet, determine policy priorities and prepare to govern a nation facing numerous crises and sharply divided along partisan lines.

Joe Biden has been dreaming of the White House for most of his 50 years in the public arena. With this prize of a lifetime, however, come the challenges of a lifetime.

Usually the losing candidate concedes but Mr Trump has vowed to contest the election results on several fronts.

Responding to the Pennsylvania results, his campaign put out a statement saying: “This election is not over. The false projection of Joe Biden as the winner is based on results in four states that are far from final.”

A recount will be held in Georgia, where the margins are tight, and Mr Trump wants the same in Wisconsin. He has also vowed to take legal action to the Supreme Court, alleging voting fraud without evidence.

If the election result is challenged, it would require legal teams to challenge this in the state courts. State judges would then need to uphold the challenge and order a recount, and Supreme Court justices could then be asked to overturn a ruling.

Meanwhile, votes in some states are continuing to be counted and results are never official until final certification, which occurs in each state in the weeks following the election.

This must be done before 538 chosen officials (electors) from the Electoral College – which officially decides who wins the election – meet in their state capitals to vote on 14 December.

The electors’ votes usually mirror the popular vote in each state. However, in some states this is not a formal requirement.

The new president is officially sworn into office on 20 January after a transition period to give them time to appoint cabinet ministers and make plans.

The handover of power takes place at a ceremony known as the inauguration, which is held on the steps of the Capitol building in Washington DC.

After the ceremony, the new president makes their way to the White House to begin their four-year term in office.