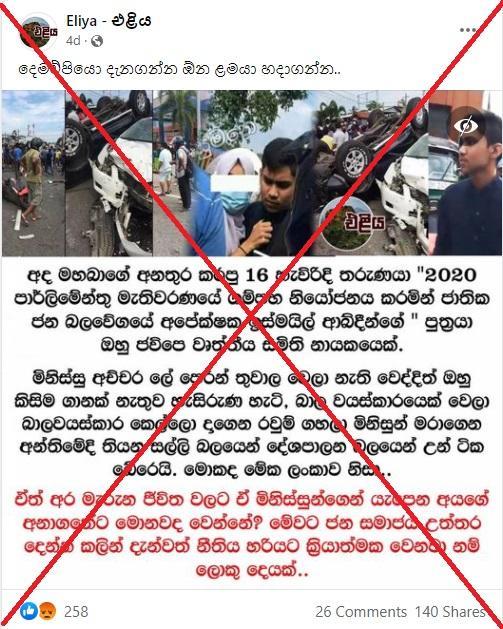 Following a fatal car crash in Sri Lanka in which a jeep collided with several other vehicles, Facebook posts claimed a 16-year-old boy at the wheel was the son of opposition politician Ismail Abdeen. The claim is false; a police spokesman dismissed the rumours as “false information”, while Abdeen said the teenager involved was not his son.

“The 16-year-old youth who caused the Mahabage accident is the son of the NPP’s 2020 general election candidate who represented Gampaha, named Ismail Abdeen. He is a JVP trade union leader,” reads a Sinhala-language Facebook post from November 4.

Ismail Abdeen ran as a JVP candidate in the 2020 elections, seeking to represent the district of Gampaha.

One person died and four others were injured when a jeep driven by a 16-year-old boy crashed into several other vehicles on November 4 in Mahabage, a suburb outside the Sri Lankan capital Colombo, local media reported.

In Sri Lanka, the minimum age required to obtain a driver’s licence is 18.

Similar Facebook posts shared the claim that the 16-year-old involved was Abdeen’s son here and here.

However, the claim is false.

The father of the 16-year-old boy “is a jewellery shop owner,” the spokesman told AFP on November 6.

Police have not publicly named the boy.

The boy was arrested and his father was also taken into the custody for allowing a minor to drive, Sri Lanka’s Daily Mirror reported.

Abdeen told AFP that the boy involved in the crash was not his son and that all his children are over 18.

“I have three sons and they are all above 18. This claim has been created to fulfill a political agenda,” he told AFP on November 6.

Abdeen also denied the claims in a video posted on JVP’s Facebook page.

“This is a defamatory claim,” he said in Sinhala. “None of my children are involved in this accident.”