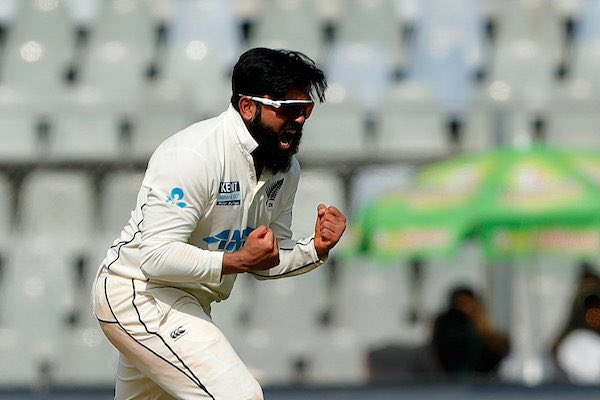 Ajaz Patel was dreaming of big things as he returned to Mumbai, the city where he was born, to play a test against India for the Black Caps, but he would never have imagined this.

The left-arm spinner took all 10 wickets to fall in the hosts’ first innings, just the third time that feat has been achieved in the 144-year history of test cricket. He was the first to do it in the first innings of a test.

Jim Laker, for England against Australia in Manchester in 1956, and Anil Kumble, for India against Pakistan in Delhi in 1999, were the only bowlers to have previously managed it. Laker took 10-53 while Kumble took 10-74.

Patel took 10-119 at Wankhede Stadium as India were dismissed for 325 after winning the toss and choosing to bat – the best test figures by any New Zealander.

Sir Richard Hadlee’s old mark of 9-52, against Australia at The Gabba in Brisbane in 1985, had stood unchallenged for 36 years.

No-one had ever taken eight until Patel got there shortly after lunch.

In Brisbane all those years ago, Vaughan Brown took the ninth wicket, with Hadlee taking the catch before finishing the job himself.

In Mumbai, Patel got his ninth when Rachin Ravindra took a catch at long-off as Jayant Yadav holed out for 12.

Patel’s first four wickets came on day one, including that of Indian captain Virat Kohli, who was upset as he felt he’d got bat on the ball when he was given out LBW.

He reviewed the decision, but there was no conclusive evidence to support it being overturned.

Patel finished the first day with 4-73 from 29 overs and said his return to the city he left in 1996 – but has visited many times since – was “what dreams are made of”.

He also said the job was “only half done,” but no-one would have been expecting him to do the other half – and then some – by himself.

Two wickets came in his first over of the day as he secured his third five-wicket bag in tests, but Axar Patel denied him the chance to become the third New Zealander to take a test hat-trick.

Wriddhiman Saha was out LBW for 27 to Patel’s fourth ball of the day, while Ravichandran Ashwin followed for a golden duck off the next, clean bowled. For some reason, he thought he’d been caught behind or stumped and tried a review.

No more wickets fell before lunch as Indian opener Mayank Agarwal continued to bat on and on.

He was finally out in Patel’s first over after the break, caught behind the ball after he reached 150, giving the spinner his seventh wicket.

Patel missed an early chance for his eighth when he failed to review an LBW shout against Jayant.

It was a successful review that got him there in the end, against left-hander Axar Patel, who was struck on the inside of his leg while trying to pad a ball away outside off stump and was sent on his way for 52.

At that point, he’d become the second New Zealander to take eight wickets, after Hadlee and he had the best figures by any spinner.

It wasn’t long before he had the best figures of them all – 10-119 from a total of 47.5 overs – and a performance in his hometown he’ll never forget.