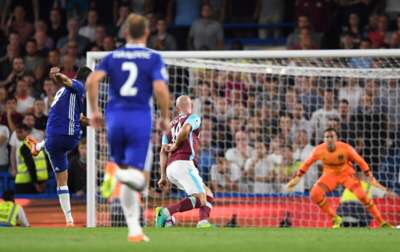 London (AFP) – Diego Costa thrust himself back into the headlines with an 89th-minute winner as Chelsea edged West Ham United 2-1 in Antonio Conte’s first Premier League game as manager on Monday.Eden Hazard, symbol of Chelsea’s slump from champions to a 10th-place finish last season, opened the scoring at Stamford Bridge with a penalty early in the second half, before James Collins equalised in the 77th minute.

Costa arguably should have been shown a second yellow card after catching West Ham goalkeeper Adrian with a late challenge, but he stayed on to steer a dramatic winner into the bottom-left corner from 20 yards.

But it was a bitter defeat for West Ham manager Slaven Bilic, who lost debutant Andre Ayew to an apparent right thigh injury in the 34th minute.

With both managers spending the entire match on the edge of their technical areas, suited and gesturing animatedly, the game was characterised by hasty, imprecise football and full-blooded tackling.

Kante started at the base of midfield in the only change to the Chelsea team that started last season’s opening game — a 2-2 draw with Swansea City that gave the first hints of the rot that was about to set in.

Bilic fielded two debutants in Ayew and left-back Arthur Masuaku, but the former was forced into a premature exit after injuring himself chasing after the elusive Hazard.

The hosts’ high defensive line prevented West Ham bringing lone striker Andy Carroll into the game and the early chances were all Chelsea’s. 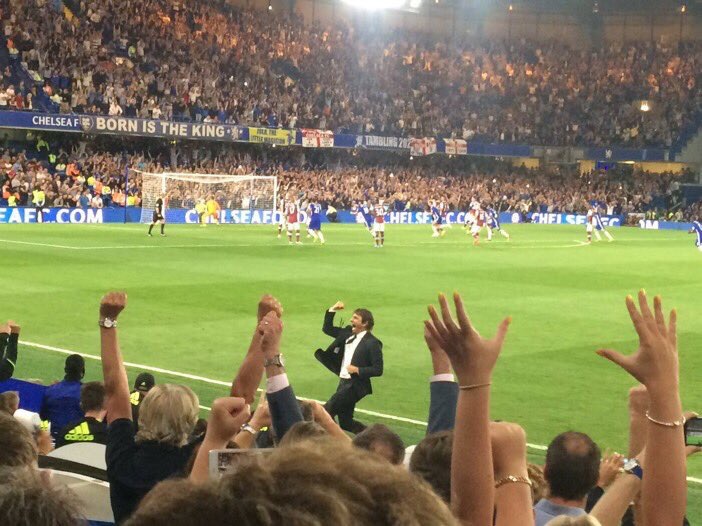 Branislav Ivanovic drew a save from Adrian at his near post, Hazard curled a shot a foot wide following a probing run and Willian obliged Adrian to palm a dipping free-kick over the bar.

West Ham’s resistance was broken two minutes into the second half after Cesar Azpilicueta charged down an attempted clearance by Michail Antonio on the edge of the visitors’ box.

In seeking to atone for his error, Antonio succeeded only in blundering into Azpilicueta from behind, obliging referee Anthony Taylor to point to the spot.

Hazard thundered the penalty into the roof of the net and within four minutes Antonio had been replaced by Sam Byram, the former Nottingham Forest player storming past Bilic and straight down the tunnel.

With West Ham offering next to no attacking threat, Chelsea continued to attack, Willian working Adrian with a crisp shot and John Terry heading over.

But the hosts should have been reduced to 10 men when Costa, booked in the first half for dissent, caught Adrian with an ugly late challenge as the West Ham goalkeeper dallied over a clearance.

West Ham looked to have pulled off a smash-and-grab with 13 minutes remaining when Chelsea failed to clear a corner and Wales international Collins lashed a left-foot shot past Thibaut Courtois.

But with full-time looming, former Marseille striker Batshuayi flicked on a long ball to Costa, who steadied himself before guiding a shot between Collins’s legs and beyond Adrian’s despairing drive.