Some of the world’s wildest and most beautiful scenery is best enjoyed from a train window.

The civil war in Sri Lanka involving the LTTE crippled the Colombo to Jaffna travel for years. Post-war efforts restored to normalcy the Yal Devi which makes to Gaurdian’s top 18 of the world’s best rail journeys. Here is the full list.

The Caledonian Sleeper, one of Britain’s last sleeper services (the other is the Night Riviera to Penzance), is getting a £100m upgrade. The new trains will have double beds, en suites, Highland food and Arran toiletries. They’ll run first on the Lowland route from London to Edinburgh/Glasgow in October, then join the Highland route to Fort William next year. The Highland service, called the Deerstalker, is one of the best train journeys in Britain. After Glasgow, it goes past Loch Treig to the foot of Ben Nevis. From Fort William, the line continues to Mallaig, across the Glenfinnan viaduct –

of Harry Potter fame – for ferries to Skye. 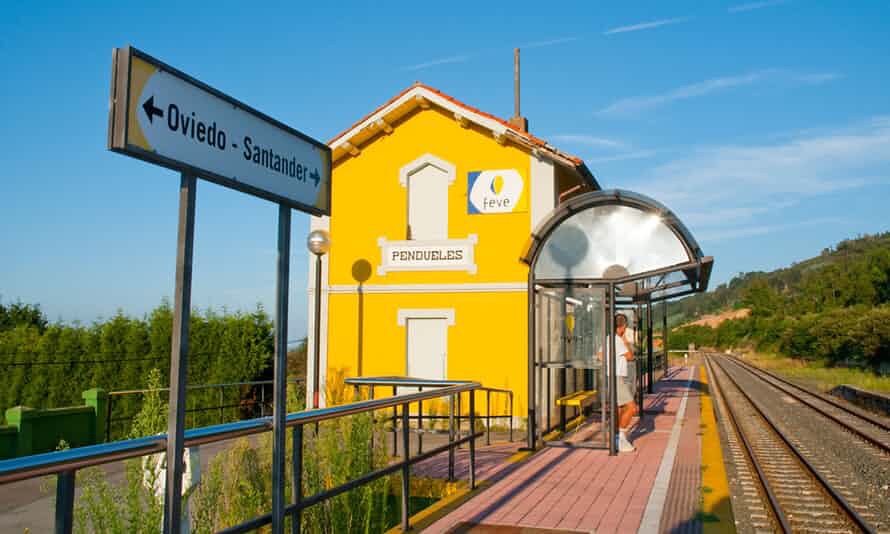 Duration: 267 miles/12½hr
Price: From £52
The narrow-gauge Feve line along Spain’s north coast is used mainly by locals and is perfect slow travel. Spend a week or more (a 30-day pass is €88.90), hopping on and off at medieval towns, fishing villages and beaches. The route skirts the coast and twists inland through green valleys. Inntravel has a new one-week self-guided trip by train from Cudillero to Ribadesella (from £595, inntravel.co.uk). 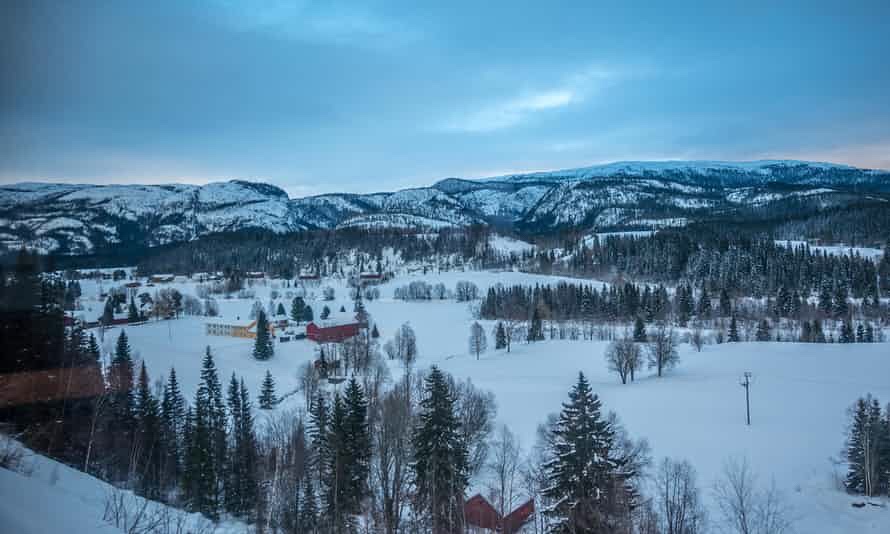 Duration: 453 miles/10hr
Price: From £18
The Nordlandsbanen Railway is the longest in Norway, and the only one in the country to cross the Arctic Circle. From Trondheim, it passes farms, forests, mountains, rivers and fjords before reaching Bodø, for ferries to the Lofoten islands. A monument in the Saltfjellet mountains marks the Arctic Circle. From here, passengers can see the midnight sun in summer and, with luck, the northern lights in winter – there is a sleeper as well as two daytime trains. There are nearly 30 stations en route, and the line is included in the Norway Interrail pass (from £155, interrail.eu).

There is no need to fly to Sicily. There are direct rail services from Milan (overnight sleeper), Rome and Naples (day and night), with the trains shunted on to a ferry at Villa san Giovanni in Calabria to cross the Messina Strait. These are some of Europe’s few remaining passenger ferry trains. The Naples train skirts Vesuvius, then largely hugs the coastline all the way to the toe of Italy. Pack a picnic, as there is no catering on board. Once in Sicily, the train divides into two, one heading south past Etna on the way to Catania and Siracusa, the other going west to Palermo, the capital.

Duration: 98 miles/3½ hours
Price: £19
Corsica has 144 miles of narrow-gauge track, built through mountains over 22 years in the late 19th century. That enterprise, which took an incredible 22 years, has resulted in one of Europe’s most dramatic railways, with 32 tunnels and 52 bridges and viaducts, including one, the Pont du Vecchio, designed by Gustav Eiffel. The most spectacular stretch is between Corte and Bocognano, following the Gravona valley through gorges and past the spectacular 70-metre Bride’s Veil waterfall. Another line, from Ponte-Leccia to Calvi, hugs the north-west coast from L’Ile-Rousse. New flights started on 3 May from Stansted to Ajaccio, Bastia and Figura (from £98, aircorsica.com).

Last summer, after two years of rebuilding, the line between Mostar and Sarajevo reopened with air-conditioned trains. This is a great train bargain, with rugged scenery, especially along the Neretva river. While the road sticks to the valley, the train climbs over the mountains, with viaducts, switchbacks and tunnels. From Sarajevo, there used to be a direct train to Zagreb, in Croatia. Negotiations between the two countries continue – check seat61.com for updates.

Duration: 951 miles/26hr
Price: £40 in a sleeper
The Blue Train from Pretoria to Cape Town is one of the world’s most luxurious, with prices to match: from £895pp. But there are two non-luxury alternatives on the same route, starting in Johannesburg rather than Pretoria. The Shosholoza Meyl train is the cheapest, but still has sleeping cars and a restaurant. The Premier Classe train (from £189) has private sleepers, all meals included and a lounge-bar car. Passengers see exactly the same views of the Karoo desert, Hex river pass, Cape wine region and Table Mountain, but at a fraction of the cost. 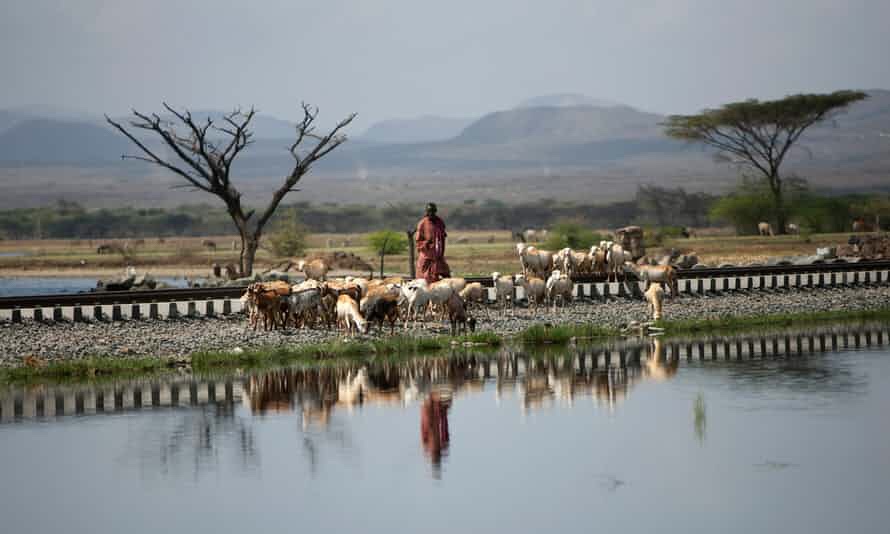 Duration: 452 miles/13hr
Price: From £26
For a real adventure, try the new line between Ethiopia and Djibouti, which opened last January with new trains and stations, replacing old tracks that shut in 2010. Trains call at Adama in the Rift Valley; cross the Awash river canyon over a 60-metre-high, 155-metre-long bridge; stop off at Ethiopia’s second city, colourful Dire Dawa; then finish at coastal Djibouti City. Tickets have to be booked in person at the station 24 hours in advance, and travellers should allow about 45 minutes for bag checks and immigration controls (you can’t board the train without a Djibouti visa). Ethiopia is planning other cross-border lines, to Kenya, Sudan and South Sudan, by 2020.

Duration: 1,156 miles/46hr
Price: From £17
The Tazara train is a great way to go on safari on a tiny budget. The route goes though Selous game reserve, one of the biggest in the world, for the chance to spot elephants, rhinos, hippos, lions, giraffes, zebras and more. That’s transport, two nights’ accommodation and wildlife viewing for under £20! By comparison, the luxury Rovos Rail tour follows the same route from Dar es Salaam before continuing to Angola or Cape Town, from £9,000 for 15 days.

Duration: 406 miles/16hr
Price: £53
If this route, with its 86 tunnels and 37 bridges, doesn’t give you a reason to look out the window we’re not sure what will. The train rides through the canyons of the Sierra Tarahumara as it runs from the coast to the city of Chihuahua. It’s the perfect route for a cross-country adventure – passengers can make up to three different overnight stops at no extra cost.

The epic, two-night Churchill to Winnipeg route – offering passengers the chance to spot everything from polar bears to the northern lights – is currently suspended after flooding damaged track and bridges. However, there are plenty of other Canadian rail adventures, such as this ride, informally called the Budd Car, that links many remote settlements in northern Ontario that are only accessible by rail. The wilderness route goes through rich forests and past shimmering, crystal-clear rivers, all of which travellers can gaze at in comfort through the train’s large windows. The train runs three times a week, and is particularly popular in October for the fall colours.

Duration: 356 miles/12hr
Price: From £137
The Denali Star is the Alaska Railroad’s flagship train, winding past rivers, canyons and mountains; highlights include the view from the Hurricane Gulch bridge (pictured), and, on a clear day, the sight of Denali, North America’s highest mountain. The journey can be spread over a few days, with nights in Anchorage and the national park (£600 for five nights). The trains runs daily from 16 May to 16 September, and on winter weekends and selected weekdays. 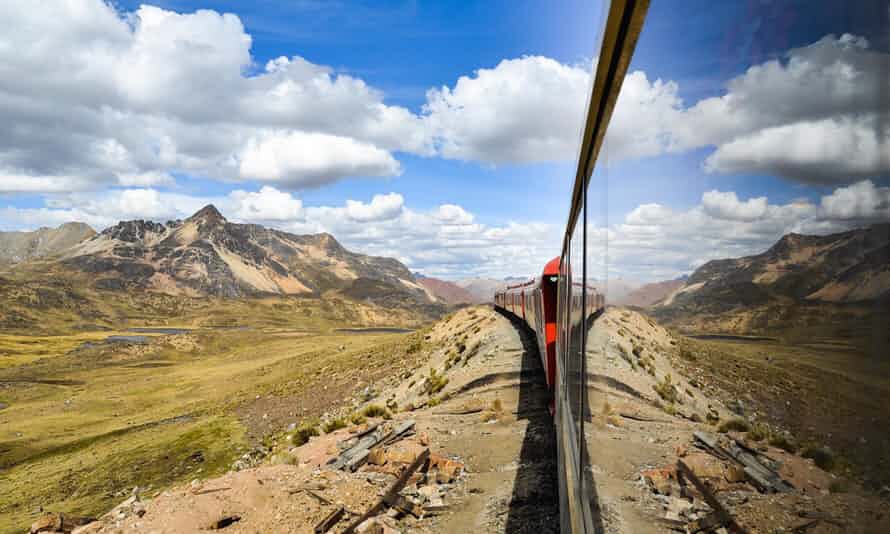 Most travellers to Peru will take the tourist train from Cusco to Machu Picchu. It’s a fun ride (albeit a busy one) but for a more unusual experience, try the journey from Lima to Huancayo, the charming capital of the central highlands. The second-highest passenger railway journey in the world, it reaches a height of 4,782 metres as it rolls through the Andes. Before planning a trip, however, note that the train only runs once or twice a month; check the website for timetables.

The Nilgiri Mountain Railway to Udagamandalam (or Ooty) hill station is India’s only rack and pinion railway, part of the Unesco-listed Mountain Railways of India. Its blue-and-cream trains ply the steepest track in Asia. The uphill leg takes about five hours, but it’s just three-and-a-half back down. It runs past ravines, tea plantations and forested hills; the train crosses 250 bridges and passes through 16 tunnels. This year, steam trains have been reintroduced, though priced for tourists (weekends to 24 June, from £8.60). Book well in advance. 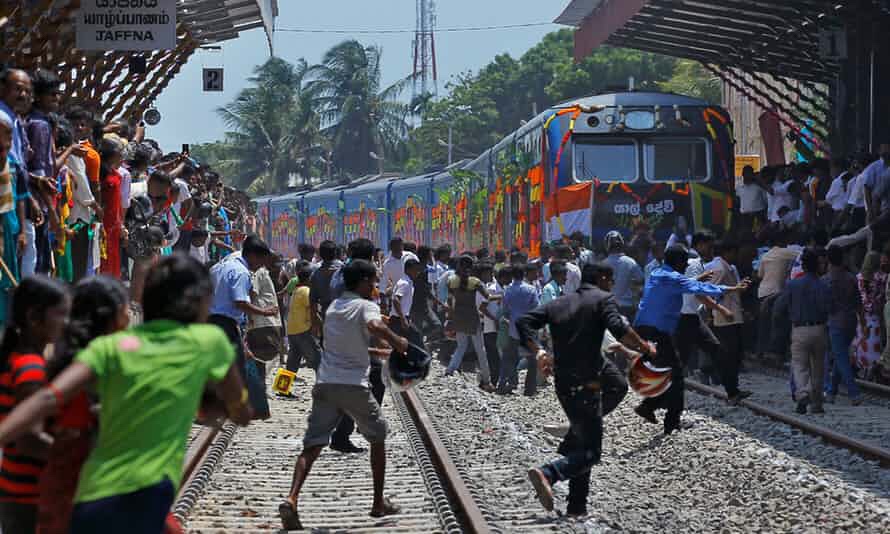 Duration: 190 miles/6¾hr
Price: About £3.50
For decades northern Sri Lanka was virtually cut off by the civil war, and second city Jaffna lost population and prestige. But the line from the capital reopened in 2013, and now foreigners and Sri Lankans alike are exploring the city and its fascinating Tamil culture. Intercity trains are supposed to take less than seven hours, though delays are frequent. Reservable first- and second-class tickets go on sale 30 days in advance, but there’s no online booking: visitors need to use an agency such as visitsrilankatours.co.uk. Book well in advance to snaffle a seat in an observation car (selected trains only) with large windows for watching the scenery change from lush to dry, dotted with bright-striped Hindu temples.

Duration: 1,225 miles/21hr
Price: From £55
The Qinghai-Tibet Railway is the highest in the world, climbing to a breathtaking 5,231 metres at the Tanggula Pass. There are direct long-distance trains to Lhasa from several major Chinese cities, including Beijing and Shanghai, but it is advisable not to go straight there but to spend a couple of days acclimatising to the altitude in Xining (2,300 metres) along the way. (The train carriages do have oxygen pumped into them, though, and extra oxygen tubes for passengers.) Foreign nationals need a permit to enter Tibet – this is best arranged through an authorised travel agency. The scenery of the Tibetan plateau is breathtaking: arid steppe crisscrossed by frozen rivers, with a backdrop of snow-covered peaks. There are plans to extend the line to the subtropical town of Zhangmu on the Nepal border by 2020.

From 2009, there were no passenger trains in Cambodia. Then, in 2016, the southern line from the capital, Phnom Penh, to Sihanoukville in the south reopened. Last month, part of the northern line reopened, too, for the first time in 45 years. So far, there is just a short section in operation, from Poipet, on the Thai border, to Sisophon, Cambodia’s fourth city, but it will be extended south to popular Battambang at the end of the month, then on to Pursat and Phnom Penh (209 miles in total). Best of all, travel on the line is completely free until the end of July. A new route is also being planned between Phnom Penh and Vietnam’s Ho Chi Minh City. When both lines are completed, it will open up train travel between Thailand, Cambodia and Vietnam.

Australia has mammoth train journeys, such as the 2,698-mile Indian Pacific from Sydney to Perth and the Ghan from Adelaide to Darwin. Puffing Billy is not like those: the century-old steam train chugs through the Dandenong Ranges near Melbourne. After the historic Monbulk Creek trestle bridge, it enters a ferny forest that’s home to echidnas and koalas. It is good for families, and a lot more manageable than a cross-country epic.