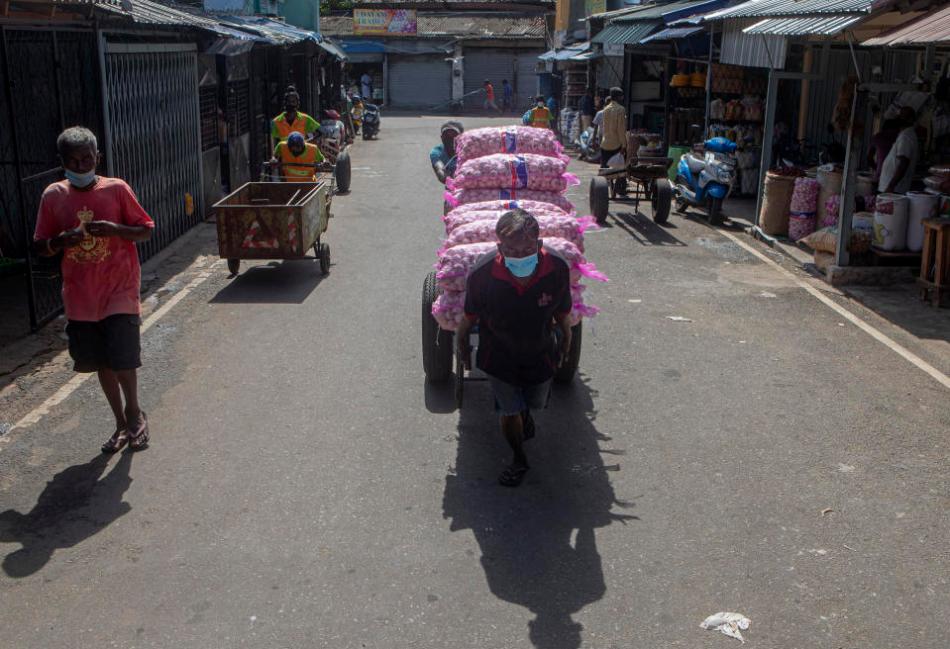 COLOMBO, Sri Lanka (AP) — Sri Lanka has cut back on imports of farm chemicals, cars and even its staple spice turmeric as its foreign exchange reserves dwindle, hindering its ability to repay a mountain of debt as the South Asian island nation struggles to recover from the pandemic.

Toothbrush handles, venetian blinds, strawberries, vinegar, wet wipes and sugar are among the hundreds of foreign-made goods that were banned or made subject to special licensing requirements meant to chip away at a trade deficit that has been deepening the country’s financial quandary for years.

Shortages are pushing prices higher for many consumer goods, from bread to construction materials to gasoline, triggering protests among Sri Lankans fed up with the prolonged crisis.

Thusitha Vipulanayake ran out of motorcycles to sell in August 2020. Usually able to sell at least 30 a month, and a dozen motorized trishaws, he now gets by selling bottled, locally grown turmeric paste and LED lightbulbs.

“This is something we never expected,” Vipulanayake said as he sat at his empty motorcycle showroom along a road outside the capital Colombo.

Sri Lanka was in trouble before the pandemic struck, laying low a tourism industry that is a vital source of foreign exchange earnings. It normally provides jobs for more than 3 million people and accounts for about 5% of GDP.

Visitors already were staying away after deadly suicide bombings on Easter Day 2019 killed more than 250 people. But efforts to revive the industry are falling flat as the country endures another wave of COVID-19 infections.

Now, the country’s foreign exchange reserves have dwindled to barely enough to pay for three months of imports at a time when big repayments of its foreign debts are falling due, straining its financial system. The Petroleum Minister, Udaya Gammapilla, recently said the country lacked enough cash to pay for oil imports.

“The condition of the economy is in dire straits, there is no doubt about it” said Muttukrishna Sarvananthan, head of the economic research group Point Pedro Institute of Development.

Sri Lanka needs to make foreign debt payments totaling $3.7 billion this year, having paid $1.3 billion so far. That’s in addition to local debt, according to the central bank. Its currency has been gradually weakening against other major currencies, making such repayments more costly in local terms.

Fitch Ratings has downgraded Sri Lanka to its CCC category, indicating a real possibility of default. It says the country’s foreign debt obligation will balloon to $29 billion over the next five years.

And it is facing the possible loss of preferential trade status for its garment exports to Europe, due to criticism over an terrorism law that critics say violates human rights.

To help rebuild its reserves, Sri Lanka obtained a $1.5 billion swap facility from China earlier this year. A $400 million swap from India will be available by August, according to the Central Bank.

Officials say they hope to attract more foreign investment and avoid seeking help from the International Monetary Fund, which tends to impose strict policy conditions on its borrowers.

The government’s decision in April to ban the use of agricultural chemicals, ordering farmers to switch to organic farming, was aimed at saving $400 million a year on imports.

But Sri Lankan farmers rely heavily on such chemicals. Some said they are using cow dung, poultry litter and compost to make up for the loss of fertilizer, but the sudden switch is hurting yields.

“The leaders of the country could have done better in making decisions,” farmer Pathmasiri Kumara said he worked in his field in Welimada, a village in the central hills of this tropical island country. “These problems come when you don’t come and see the farmers and make decisions sitting on swiveling chairs.”

“Look at this potato plant, it’s not growing the way it should because there is no fertilizer,” Kumara said. “It’s a very sad situation. This is our main crop and if we don’t get chemical fertilizer we will be losing our income for the entire year, at least by half.”

The pressure is on garment makers, as well, as the European Union reviews its favorable tariff treatment for Sri Lankan products under the GSP, or generalized system of preferences. It eliminates import duties on a large share of Sri Lanka’s products, such as textiles, tea and fish, an advantage worth some $360 million annually, according to the EU.

A decision is not due until next year. But the impact of losing the concessions would be “quite severe,” said Sirimal Abeyratne, professor of economics at the University of Colombo.

About 20% of Sri Lanka’s total exports are to EU countries. Another 10% go to the United Kingdom, which may follow the EU’s lead if it suspends its GSP status, said Abeyratne.

In the meantime, Sri Lankans are chafing at the import restrictions that are slowing activity in various industries.

Metlal Weerasuriya waited five months to buy a toilet for his home.

“I went to many retail and wholesale shops. They had run out of stocks and there was a waiting list to get one,” said Weerasuriya, a journalist. Finally, he tracked down one advertised online.

“So, it took at least five months to buy a commode and complete the bathroom, “he said.

Vipulanayake, the motorcycle dealer, said he’s relying on income from a modest rubber plantation he owns, on top of his sales of various other products, to get by.

He’s determined to hold onto his showroom, which is in a prime location.

“I believe things will be okay and bikes will come,” he said. “Maybe I’m just dreaming, since things are so uncertain.”