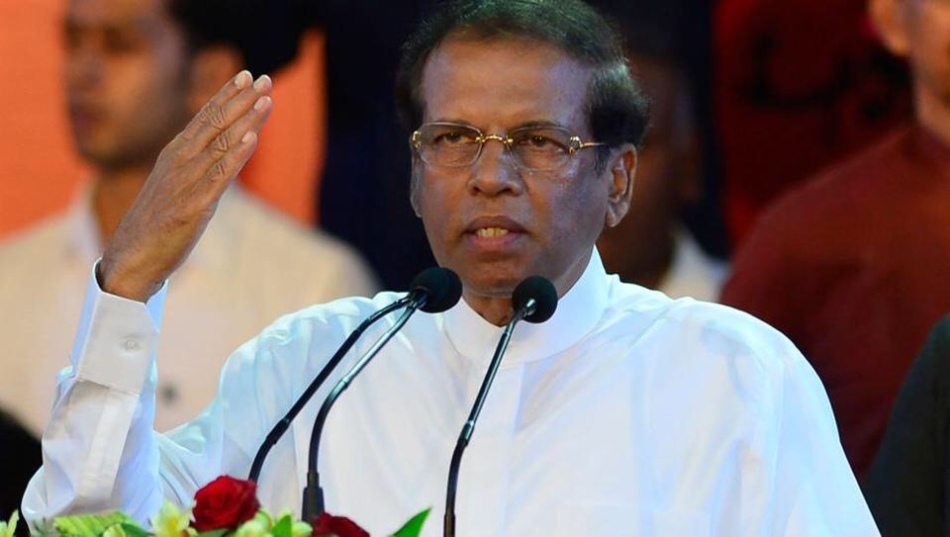 Sri Lanka President Maithripala Sirisena addressing the media, says one of the main causes for the rift between the government and himself was his opposition to the “weakening of the security forces.”

President addressing media heads said that the IGP will resign today, and he (IGP) as well as the Defence Secretary (who resigned yesterday) did not fulfill their responsibilities.

“They just passed letters to each other.” The President adds that he was only made aware of letter through social media while in Singapore even though he met with who IGP and Defense Secretary mid-April, but neither briefed him of any impending threat to the country. “Action will be taken against all officials who neglected their duties, and a total reorganization the security establishment in the days to come will take place”, warned the President, adding that “I will stamp out IS from Sri Lanka. Our Police and Security Forces are capable of achieving this”.

Six were arrested for Mawanella incident, but two released for lack of evidence; insisting “there was no political intervention” on the matter. At the moment between 130 and 140 suspects with links to the Islamic State are currently in Sri Lanka and all will be arrested, the president promised. “No foreign army will step into Sri Lanka: but we will get assistance from other nations to help us fight IS”.

“We looked into banning the NTJ on the 22 of April. But we don’t have the Laws to be able to do that right now. We are now looking into the Acts passed by the Australian Parliament to help us draft the required Laws. We will get this done very soon” , the President added.

“We were planning to lift the Social media restriction today. But yesterday there were lot of wrong information shared so we are reconsidering it now. I will meet the heads of these social media platforms today. I may ban it completely if this is not controlled” President Sirisena added

The President urged Sri Lankans not to look at the Muslim community as suspects. “They are victims just like all others. When the LTTE started, all looked at Tamils suspectingly but soon found out that LTTE were a small group of terrorists and all Tamils were not to blame”.